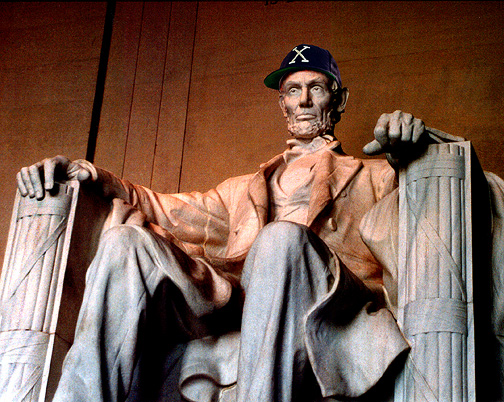 Once brimming with xenophobic put-downs, the average racist's lexicon can barely keep up with America's growing diversity.

WASHINGTON—A coalition of the nation's most fervent bigots convened in Washington Monday to address growing concerns that the production of hateful new racial slurs has failed to keep pace with the rise in mixed-race births.

According to representatives from the American Racists and Bigots Council (ARBC), the growing number of children born to parents of different ethnicities has posed a real challenge to the nation's hate-speech developers—a challenge they say threatens their way of life.

"The world is changing, and we, the hateful and ignorant of America, need to change with it," ARBC chairman Tom Branson said at a rally Monday. "The time has come for our ugly, intolerant rhetoric to step into the 21st century. Our disgusting, dehumanizing slurs simply must reflect the terrifying new global society we now live in."

Added Branson, "In order to continue going backward, we first have to move forward."

According to statistics provided by the coalition, a rise in the birthrate of mixed-race Americans has left millions of confused racists with absolutely nothing prejudiced to say when confronted by a person of indeterminate or complex background. What frightens the coalition most is data suggesting that by 2015, ignorant bigots everywhere could be powerless when it comes to reducing mixed-raced individuals to profoundly uninformed cultural stereotypes.

Hate-filled bigots marched Monday to demand insults for people of all skin tones, regardless of race or nationality.

In response, a number of prominent bigots have proposed steps for developing new slurs and counteracting what many in the racist community believe to be the greatest obstacle to the advancement of racially motivated vitriol.

"It all starts with education," ARBC strategist Michael McNeil said. "If you are at a bar drinking boilermakers in a desperate attempt to quell your rage and self-hatred and an Armenian- Brazilian man walks in, you have to be able to swiftly formulate the most vile and thoughtless way to demean him as a human being. Yell out an outdated or inaccurate slur in a situation like that, and you just wind up looking ignorant."

"The mind is an incredibly powerful thing," McNeil continued. "But it must be fed new and better ways to hate, or it will fail to grow."

According to coalition representatives, the country's top racists are working to create a multi-tiered strategy for the coming decade, including seminars on mixed-racial profiling, after-school programs designed to teach children the latest in ethnic stereotyping, and a campaign to provide poor, underprivileged white people with new state-of-the-art racial epithets for daily use.

"We all know that they are here to steal our jobs, marry our children, and take away everything we so desperately cling to, but who are 'they' really?" McNeil asked reporters. "If we can't answer that simple question, then there's no way we can go on blindly persecuting those who are different from us. To tell you the truth, I don't understand how we ever fell so far behind in the first place. Damn Nigerian Jews probably behind it, I bet."

Although many have expressed doubt over whether the nation's bigots will be able to remain as effective in this century as they were in the past two, Branson contended that the difficulties of navigating the country's so-called post-racial landscape are temporary and will soon be rectified.

"This is just a minor setback," Branson told reporters. "Our new and improved slurs will soon tip the balance of power back into the hands of honest, hardworking white citizens, and all of the other breeds and half-breeds living within what was still called the United States of America, last time I checked, will go back to whatever dirty little heathen countries they crawled here from and never come back. Oh, they think they're so smart, see, but no, they're not smart at all, none of them, all they are is just a bunch of stupid…goddamn…they're nothing, do you see what I'm saying? They're just a dumb…fucking…bunch of…of…."

Putting the World Economic Forum out of Business!