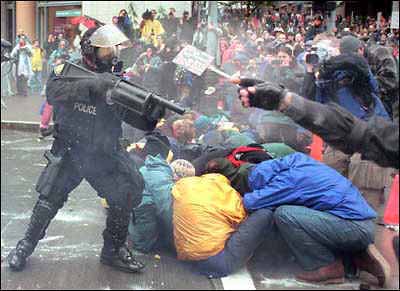 For years Arizona has been known as the “sunset state,” but lately some residents simply call it the “surveillance state.”

“They track us everywhere we go,” says Phoenix resident Shawn Dow. “It’s unbelievable. I can’t go anywhere and not have a camera tracking me.”

Dow is now trying to change all that with a ballot initiative this November that would ban all ticket cameras in Arizona.

“I’m tired of being constantly watched,” he said. We’re all being tracked like cattle.”

The owner of any car caught going over the speed limit or running a red light receives a ticket by mail.

Heiler points out that 240 communities in 21 states now use ticket cameras to “modify driver behavior.”

“That’s not to say from time to time there isn’t a level of government somewhere that also deploys the technology having analyzed its revenue generating capacity.”

According to Dow, that’s exactly the problem, he says the cameras are less about making the roads safe than they are about taxing Arizona drivers.

“Study after study shows that these cameras increase rear end collisions,” he says. They do not improve safety. That is a big scam. All they want to do is take your money.”

Dow points out that RedFlex, which pockets half the fine of every ticket, is based in Australia. He says much of the revenue stream generated from the tickets isn’t even staying in Arizona. “It’s an outrage,” he says.

And Dow is getting support from some surprising circles.

Powerful Sheriffs Joe Arpaio of Maricopa County and Paul Babeau, of Pinal County have both signed the initiative, which is set to appear on the state ballot on November 2nd .

Babeau even attended a recent rally against RedFlex in front of the company’s Phoenix office last month claiming the cameras perform work that should be done by human beings.

Babeau also has a problem with Red Flex making money off of writing tickets while playing a role in prosecuting them, a motivation he says blurs a line that a police officer and sheriff would not cross:

“It's an unholy alliance and I believe it's a corrupting influence for law enforcement.”

“We are no more blurring that line than anybody else who lends any other service to law enforcement,” he says.

Making the cameras even more unpopular is the fact that only Arizona residents receive tickets. Drivers from other states and other countries like Canada and Mexico do not get fined.

Camera bans have now appeared on ballots in 9 communities across the country. Dow likes to point out ticket cameras have never survived a vote of the people.

“Come November,” he says. “The cameras are coming down.”