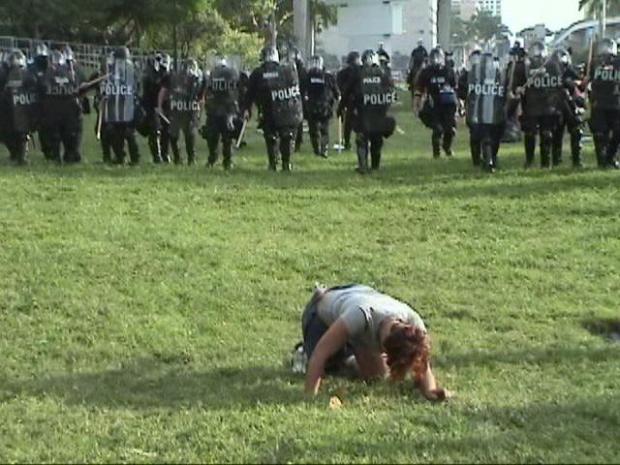 Once upon a time, the United States was a land of unparalleled freedom.  The rest of the world envied the freedom that ordinary Americans had to think, say and do what they wanted.  But all of that has changed.  Now Americans have to fear that they will be tackled by a squad of security goons and dragged off to a detention facility somewhere if they spill a Pepsi on a flight attendant or take a few too many pictures of a public building.  The United States used to be the polar opposite of totalitarian regimes like Nazi Germany and the Soviet Union, but now America is rapidly becoming very much like them.  Due to the fear of a boogeyman living in a cave somewhere or some guy with explosive powder in his underwear we are all being forced to give up our freedoms and learn to live in a Big Brother police state.

But have things really changed so much that we have to give up all of the cherished freedoms that our fathers and grandfathers fought and died for?  Haven't there always been fanatics and crazies and criminals out there?  Why do we suddenly have to become so afraid of them?

In the past, Americans would not let anyone make them live in fear.  If some unbalanced individual did something bad, it wasn't the end of the world, was it?  No, in the past Americans dusted themselves off and continued to live as free men and women.  You see, when we live in fear and radically alter our way of life just to feel a little more secure, we lose.  We have let someone else steal our freedom and our dignity.

But now in the name of "security" all kinds of bizarre proposals have been implemented on the local, state and national levels.  Somehow we think that if everything that we do is watched, monitored and analyzed we will all be safer somehow.

Maybe we are safer and maybe we aren't, but we are certainly a whole lot less free.

The following are 20 signs that the United States is rapidly becoming a totalitarian "Big Brother" police state....

#1) A new bill being pushed by Senators John McCain and Joe Lieberman would allow the U.S. military to round up large numbers of Americans and detain them indefinitely without a trial if they "pose a threat" or if they have "potential intelligence value" or for any other reason the President of the United States "considers appropriate".

#2) Lawmakers in Washington D.C. working to create a new immigration bill have decided on a way to prevent employers from hiring illegal immigrants: a national biometric identification card all American workers would be required to obtain.

#3) Barack Obama is backing a plan to create a national database to store the DNA of people who have been arrested but not necessarily convicted of a crime.

#4) Just to get on an airplane, Americans will now have to go through new full-body scanners that reveal every detail of our exposed bodies to airport security officials.

#5) If that wasn't bad enough, the Transportation Security Administration has announced that airport screeners will begin roving through airports randomly taking chemical swabs from passengers and their bags to check for explosives.

#6) Starting this upcoming December, some passengers on Canadian airlines flying to, from or even over the United States without ever landing there, will only be allowed to board their flights once the U.S. Department of Homeland Security has determined they are not terrorists.

#7) Organic milk is such a threat that the FDA has been conducting military style raids on Amish farmers in Pennsylvania.

#8) An NYPD officer has broken his silence and has confessed that innocent citizens are being set up and falsely arrested and ticketed in order to meet quotas.

#9) A growing number of police departments across the U.S. are turning to mobile camera systems in order to fight motor vehicle theft and identify unregistered cars.

#10) For decades, Arizona has been known as "the sunset state", but lately many frustrated residents have started calling it "the surveillance state".

#11) Judges and police in Florida have been caught using "secret codes" on tickets in the state of Florida.

#12) An extensive investigation has revealed that between 2003 and 2007, that state of Texas quietly gave hundreds of newborn baby blood samples to a U.S. Armed Forces laboratory for use in a forensics database.

#13) A 6-year-old girl was recently handcuffed and sent to a mental facility after throwing temper tantrums at her elementary school.

#14) One 12-year-old girl in New York was recently arrested and marched out of her school in handcuffs just because she doodled on her desk.

#15) In Florida, students have been arrested by police for things as simple as bringing a plastic butter knife to school, throwing an eraser, and drawing a picture of a gun.

#16) When a mother on a flight to Denver spanked both of her children and cussed out a flight attendant who tried to intervene, she suddenly found herself handcuffed and headed for prison.  Why?  She was charged with being a domestic terrorist under the Patriot Act.

#17) A new global treaty may force U.S. Internet service providers to spy on what you do online.

#18) A leaked Obama administration memo has revealed plans for the federal government to seize more than 10 million acres of land from Montana to New Mexico.

#19) 56 percent of Americans questioned in a CNN/Opinion Research Corporation poll said that the U.S. government has become so large and powerful that it poses an immediate threat to the rights and freedoms of ordinary citizens.

#20) But one other recent poll found that 51 percent of Americans agree with this statement: "It is necessary to give up some civil liberties in order to make the country safe from terrorism."