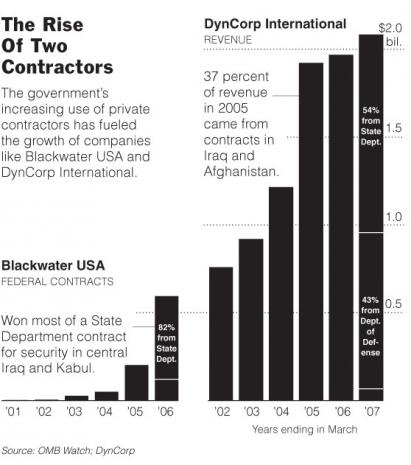 Federal auditors on Monday put a stop to Army plans to award a $1 billion training program for Afghan police officers to the company formerly known as Blackwater, concluding that other companies were unfairly excluded from bidding on the job.

The decision by the Government Accountability Office leaves unclear who will oversee training of the struggling Afghan National Police, a poorly equipped, 90,000-strong paramilitary force that will inherit the task of preserving order in the country after NATO troops depart.

GAO officials upheld a protest by DynCorp International Inc., which currently conducts training for Afghan police under a State Department contract. DynCorp lawyers argued that the company should have been allowed to submit bids when management of the training program passed from State to the Army. Instead, Pentagon officials allowed the training program to be attached to an existing Defense contract that supports counternarcotics efforts in Afghanistan.

Xe Services, the new name of Blackwater, was poised to win one portion of a much larger group of contracts, shared among five corporations, that could earn the companies more than $15 billion over five years.

GAO officials said the decision will allow a new round of bidding by DynCorp and other firms, including Xe Services.