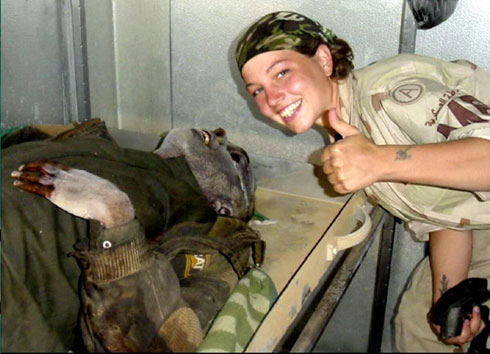 PARIS (AFP) – Game show contestants turn torturers in a new psychological experiment for French television, zapping a man with electricity until he cries for mercy -- then zapping him again until he seems to drop dead.

"The Game of Death" has all the trappings of a traditional television quiz show, with a roaring crowd and a glamorous and well-known hostess urging the players on under gaudy studio lights.

But the contestants did not know they were taking part in an experiment to find out whether television could push them to outrageous lengths, and which has prompted comparisons with the atrocities of Nazi Germany.

"We were amazed to find that 81 percent of the participants obeyed" the sadistic orders of the television presenter, said Christophe Nick, the maker of the documentary for the state-owned France 2 channel which airs Wednesday.

"They are not equipped to disobey," he added. "They don't want to do it, they try to convince the authority figure that they should stop, but they don't manage to," he told AFP.

Nick and a team of psychologists recruited 80 volunteers, telling them they were taking part in a pilot for a new television show.

The game: posing questions to another "player" and punishing him with up to 460 volts of electricity when he gets them wrong -- even until his cries of "Let me go!" fall silent and he appears to have died.

Not knowing that the screaming victim is really an actor, the apparently reluctant contestants yield to the orders of the presenter and chants of "Punishment!" from a studio audience who also believed the game was real.

Nick said 80 percent of the contestants went all the way, zapping the victim with the maximum 460 volts until he appeared to die. Out of 80 players, just 16 walked out.

One contestant interviewed afterwards said she went along with the torture despite knowing that her own grandparents were Jews who had been persecuted by the Nazis.

"Since I was a little girl, I have always asked myself why they (the Nazis) did it. How could they obey such orders? And there I was, obeying them myself," said Sophie, quoted in a book by the film makers.

"I was worried about the contestant," said another contestant. "At the same time, I was afraid to spoil the programme."

The experiment was modelled on an infamous study at Yale University in the 1960s, which used similar methods to examine how obedient citizens could come to take part in mass murder.

Some observers were sceptical of the manipulative way the participants were handled.

Jacques Semelin, a psychologist and historian who studies genocide and totalitarianism, pointed out that the participants were made to sign a contract obliging them to obey the presenter's instructions.

"There are elements of manipulation from the start," said Jacques Semelin, a psychologist and historian who studies genocide and totalitarianism.

"They are obedient, but it's more than mere obedience -- there is the audience, the cameras everywhere."

But for the film makers, the manipulative power of television was exactly the point.

"The questioners are ... in the grip of the authority of television," said Jean-Leon Beauvois, a psychologist who took part in the documentary.

"When it decides to abuse its power, television can do anything to anybody," said Nick. "It has an absolutely terrifying power."

Those Torture Drawings in the NYT

Report on How the US Tortures

The 2020/2021 Ammo Shortage - What's Behind It? Are Industry Leaders Telling The Truth?