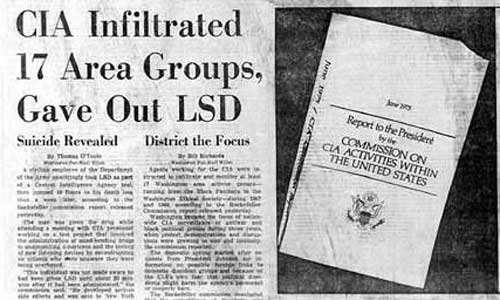 On Nov. 28, 1953, Frank Olson, a bland, seemingly innocuous 42-year-old government scientist, plunged to his death from room 1018A in New York’s Statler Hotel, landing on a Seventh Avenue sidewalk just opposite Penn Station.

Olson’s ignominious end was written off as an unremarkable suicide of a depressed government bureaucrat who came to New York City seeking psychiatric treatment, so it attracted scant attention at the time.

1 Comments in Response to Did the CIA test LSD in the New York City subway system?

Does  anyone believe  that they  stopped   doing  these  type  things ?

1967 CIA and Department of Defense implement Project MKNAOMI, successor to MKULTRA and designed to maintain, stockpile and test biological and chemical weapons.   1968 CIA experiments with the possibility of poisoning drinking water by injecting chemicals into the water supply of the FDA in Washington, D.C.   1969 Dr. Robert MacMahan of the Department of Defense requests from congress $10 million to develop, within 5 to 10 years, a synthetic biological agent to which no natural immunity exists.   1970 Funding for the synthetic biological agent is obtained under H.R. 15090. The project, under the supervision of the CIA, is carried out by the Special Operations Division at Fort Detrick, the army's top secret biological weapons facility. Speculation is raised that molecular biology techniques are used to produce AIDS-like retroviruses.   1970 United States intensifies its development of "ethnic weapons" (Military Review, Nov., 1970), designed to selectively target and eliminate specific ethnic groups who are susceptible due to genetic differences and variations in DNA.   1975 The virus section of Fort Detrick's Center for Biological Warfare Research is renamed the Fredrick Cancer Research Facilities and placed under the supervision of the National Cancer Institute (NCI) . It is here that a special virus cancer program is initiated by the U.S. Navy, purportedly to develop cancer-causing viruses. It is also here that retrovirologists isolate a virus to which no immunity exists. It is later named HTLV (Human T-cell Leukemia Virus).   1977 Senate hearings on Health and Scientific Research confirm that 239 populated areas had been contaminated with biological agents between 1949 and 1969. Some of the areas included San Francisco, Washington, D.C., Key West, Panama City, Minneapolis, and St. Louis.   1978 Experimental Hepatitis B vaccine trials, conducted by the CDC, begin in New York, Los Angeles and San Francisco. Ads for research subjects specifically ask for promiscuous homosexual men.   1981 First cases of AIDS are confirmed in homosexual men in New York, Los Angeles and San Francisco, triggering speculation that AIDS may have been introduced via the Hepatitis B vaccine   1985 According to the journal Science (227:173-177), HTLV and VISNA, a fatal sheep virus, are very similar, indicating a close taxonomic and evolutionary relationship.   1986 According to the Proceedings of the National Academy of Sciences (83:4007-4011), HIV and VISNA are highly similar and share all structural elements, except for a small segment which is nearly identical to HTLV. This leads to speculation that HTLV and VISNA may have been linked to produce a new retrovirus to which no natural immunity exists.   1986 A report to Congress reveals that the U.S. Government's current generation of biological agents includes: modified viruses, naturally occurring toxins, and agents that are altered through genetic engineering to change immunological character and prevent treatment by all existing vaccines.   1987 Department of Defense admits that, despite a treaty banning research and development of biological agents, it continues to operate research facilities at 127 facilities and universities around the nation.   1990 More than 1500 six-month old black and hispanic babies in Los Angeles are given an "experimental" measles vaccine that had never been licensed for use in the United States. CDC later admits that parents were never informed that the vaccine being injected to their children was experimental.   1994 With a technique called "gene tracking," Dr. Garth Nicolson at the MD Anderson Cancer Center in Houston, TX discovers that many returning Desert Storm veterans are infected with an altered strain of Mycoplasma incognitus, a microbe commonly used in the production of biological weapons. Incorporated into its molecular structure is 40 percent of the HIV protein coat, indicating that it had been man-made.   1994 Senator John D. Rockefeller issues a report revealing that for at least 50 years the Department of Defense has used hundreds of thousands of military personnel in human experiments and for intentional exposure to dangerous substances. Materials included mustard and nerve gas, ionizing radiation, psychochemicals, hallucinogens, and drugs used during the Gulf War .   1995 U.S. Government admits that it had offered Japanese war criminals and scientists who had performed human medical experiments salaries and immunity from prosecution in exchange for data on biological warfare research.   1995 Dr. Garth Nicolson, uncovers evidence that the biological agents used during the Gulf War had been manufactured in Houston, TX and Boca Raton, Fl and tested on prisoners in the Texas Department of Corrections.   1996 Department of Defense admits that Desert Storm soldiers were exposed to chemical agents.   1997 Eighty-eight members of Congress sign a letter demanding an investigation into bioweapons use & Gulf War Syndrome.   © 1998-2000 Health News Network All Rights Reserved   http://www.healthnewsnet.com/humanexperiments.html
Make a Comment (1) • Email Link • Send Letter to Editor

My Prediction on the CIA's Secret Assassination Files

BELIEVE IT! THE FOLLOWING IS WHAT THE BIDEN ADMINISTRATION AND THE WEF HAVE PLANNED..

CIA-run Wikipedia used as the "truth engine" to train the censorship AI...

How the Media Secretly Carries Out Assignments for the CIA