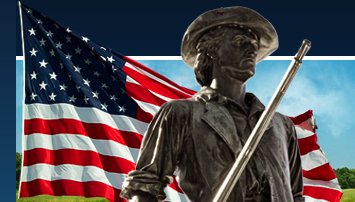 Please join Musicians for Freedom, the 2nd Amendment March, the Phoenix Campaign for Liberty, Gun Laws.com and other 2nd amendment supporters on the lawn at the Arizona State Capitol on April 19, 2010 from 12 Noon until 2 PM as we celebrate The Shot Heard 'Round the World. On April 19, 1775, Americans defeated the British Army at Lexington and Concord. April 19 is also significant in history for a number of other reasons, including the 51-day siege of the Branch Davidian building outside Waco, TX and the bombing of the Alfred P. Murrah Federal Building in Oklahoma City, OK.

Arizona is one of Open Carry.Org's "Gold Star" open carry states. There is complete state preemption of all firearms laws, open carry is common and law enforcement is well educated as to its legality. NOTE: Tribal reservations have their own laws and should be avoided or researched prior to visiting.

The right of the individual citizen to bear arms in defense of himself or the state shall not be impaired, but nothing in this section shall be construed as authorizing individuals or corporations to organize, maintain, or employ an armed body of men.

Here's a summary of the events of 1775 from The Patriot Resource:

New England and Boston had become the center of the most radical behavior by colonists against Britain. Perhaps that was partly because the Commander-in-Chief of the British Army in America,Lt. General Thomas Gage was garrisoned inBoston. The area also relied heavily on both legal and illegal exports, which the British began to tax in order to raise money to pay for the expense of the French and Indian War finally ended. In succession, Parliament passed the Sugar Act, Currency Act,Quartering Act, Stamp Act, and Townshend Act. British soldiers occupied Boston in 1768 at the request of the Royal Governor Sir Francis Bernard. In 1770, the Boston Massacre took place. Things quieted down until 1773. Following the passage of theTea Act, the Boston Tea Party took place on December 16, 1773. Parliament reacted withIntolerable Acts or the Coercive Acts.