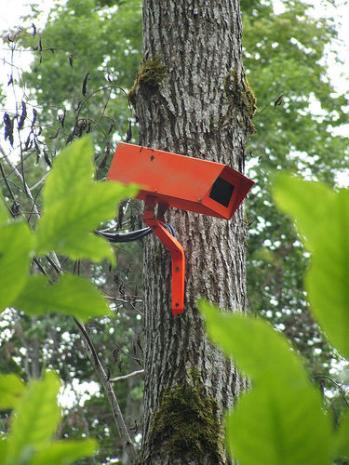 Last month, Herman Jacob took his daughter and her friend camping in the Francis Marion National Forest. While poking around for some firewood, Jacob noticed a wire. He pulled on it and followed it to a video camera and antenna.

The camera didn't have any markings identifying its owner, so Jacob took it home and called law enforcement agencies to find out if it was theirs, all the while wondering why someone would station a video camera in an isolated clearing in the woods.

He eventually received a call from Mark Heitzman of the U.S. Forest Service.

In a stiff voice, Heitzman ordered Jacob to turn it back over to his agency, explaining that it had been set up to monitor "illicit activities." Jacob returned the camera but felt uneasy.

Why, he wondered, would the Forest Service have secret cameras in a relatively remote camping area? What do they do with photos of bystanders?

How many hidden cameras are they using, and for what purposes? Is this surveillance in the forest an effective law enforcement tool? And what are our expectations of privacy when we camp on public land?

Heather Frebe, public affairs officer with the Forest Service in Atlanta, said the camera was part of a law enforcement investigation, but she declined to provide details.

Asked how cameras are used in general, how many are routinely deployed throughout the Forest and about the agency's policies, Frebe also declined to discuss specifics. She said that surveillance cameras have been used for "numerous years" to "provide for public safety and to protect the natural resources of the forest. Without elaborating, she said images of people who are not targets of an investigation are "not kept."

In addition, when asked whether surveillance cameras had led to any arrests, she did not provide an example, saying in an e-mail statement: "Our officers use a variety of techniques to apprehend individuals who break laws on the national forest."

Video surveillance is nothing new, and the courts have addressed the issue numerous times in recent decades. The Fourth Amendment guards against unreasonable searches and seizures, and over time the courts have created a body of law that defines what's reasonable, though this has become more challenging as surveillance cameras became smaller and more advanced.

In general, the courts have held that people typically have no reasonable level of privacy in public places, such as banks, streets, open fields in plain view and on public lands, such as National Parks and National Forests. In various cases, judges ruled that a video camera is effectively an extension of a law enforcement officer's eyes and ears. In other words, if an officer can eyeball a campground in person, it's OK to station a video camera in his or her place.

Jacob said he understands that law enforcement officials have a job to do but questioned whether stationing hidden cameras outweighed his and his children's privacy rights. He said the camp site they went to -- off a section of the Palmetto Trail on U.S. 52 north of Moncks Corner -- was primitive and marked only by a metal rod and a small wooden stand for brochures. He didn't recall seeing any signs saying that the area was under surveillance.

After he found the camera, he plugged the model number, PV-700, into his Blackberry, and his first hit on Google was a Web site offering a "law enforcement grade" motion-activated video camera for about $500. He called law enforcement agencies in the area, looking for its owner, and later got a call from Heitzman, an agent with the National Forest Service.

Inside the NSA's Secret Tool for Mapping Your Social Network

When Your Hospital Morphs Into A Real-Time Surveillance Center…

How We Learned To Love Big Brother