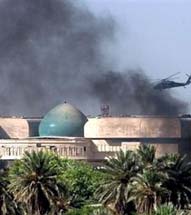 Two GOP congressmen say most Republicans on the Hill now believe the Iraq war was a mistake, and "more than half the Republican caucus" believes the way in which the US entered the Afghanistan war was also a mistake.

Reps. Tom McClintock (R-CA) and Dana Rohrbacher (R-CA) made the comments at a discussion panel at the Cato Institute on Thursday.

Going into Iraq "was a mistake because I thought we had to finish the job in Afghanistan," Rohrbacher told the panel, echoing a popular Democratic talking point at the time.

Asked by panel moderator Grover Norquist what percentage of Republican congressmen agree with that view, McClintock said, “I think everyone [in Congress] would agree that Iraq was a mistake"McClintock added that he believed the Bush administration also made a mistake in the way it entered the Afghanistan war. "I think virtually everyone would agree going into Afghanistan the way we did was a mistake," he said.

It's worthwhile noting that McClintock and Rohrbacher were speaking at the Cato Institute, a libertarian-leaning conservative think tank. Libertarians have famously stood apart from their conservative brethren in opposing the Iraq war and other foreign wars.

The Republicans' remarks came a day before former national security adviser and state secretary Condoleezza Rice voiced regret at the bloody aftermath of the 2003 invasion of Iraq. But she said the Bush administration had in the end "got it right" in the country.

Rice was unrepentant about the ouster of Saddam Hussein.

"I would many times over liberate Iraq again from Saddam Hussein. I think he's a danger to the Middle East," she said in a speech at the Chinese University of Hong Kong, when asked what she thought she had got wrong.

2 Comments in Response to GOP congressmen: Everyone agrees Iraq war a ‘horrible mistake’

For the security of the U.S. and the world, we got rid of Sadam Hussein,  the century's most dangerous international terrorist, and as a butcher feared more than Osama bin Laden. U.S. killing this Terror of Baghdad, is a war crime but the slaughter of thousands of innocent Americans in 911 is not.  Is this a mistake or just a slip of the tongue? NO! It was intentional.

Nuclear Brinkmanship Is Back: Putin OKs Using Nukes In Response To Conventional Attacks

China Warns Of Possible Armed Conflict With US Over Coronavirus Backlash

'The Land of the Free and Home of the Brave'