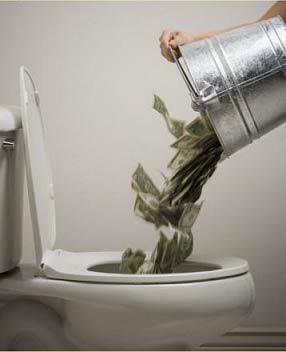 Mohammad Moqim watches in despair as his men struggle with their AK-47 automatic rifles, doing their best to hit man-size targets 50 meters away. A few of the police trainees lying prone in the mud are decent shots, but the rest shoot clumsily, and fumble as they try to reload their weapons. The Afghan National Police (ANP) captain sighs as he dismisses one group of trainees and orders 25 more to take their places on the firing line. "We are still at zero," says Captain Moqim, 35, an eight-year veteran of the force. "They don't listen, are undisciplined, and will never be real policemen."

Poor marksmanship is the least of it. Worse, crooked Afghan cops supply much of the ammunition used by the Taliban, according to Saleh Mohammed, an insurgent commander in Helmand province. The bullets and rocket-propelled grenades sold by the cops are cheaper and of better quality than the ammo at local markets, he says. It's easy for local cops to concoct credible excuses for using so much ammunition, especially because their supervisors try to avoid areas where the Taliban are active. Mohammed says local police sometimes even stage fake firefights so that if higher-ups question their outsize orders for ammo, villagers will say they've heard fighting.

America has spent more than $6 billion since 2002 in an effort to create an effective Afghan police force, buying weapons, building police academies, and hiring defense contractors to train the recruits—but the program has been a disaster. More than $322 million worth of invoices for police training were approved even though the funds were poorly accounted for, according to a government audit, and fewer than 12 percent of the country's police units are capable of operating on their own. Ambassador Richard Holbrooke, the State Department's top representative in the region, has publicly called the Afghan police "an inadequate organization, riddled with corruption." During the Obama administration's review of Afghanistan policy last year, "this issue received more attention than any other except for the question of U.S. troop levels," Holbrooke later told NEWSWEEK. "We drilled down deep into this."

The worst of it is that the police are central to Washington's plans for getting out of Afghanistan. The U.S.-backed government in Kabul will never have popular support if it can't keep people safe in their own homes and streets. Yet in a United Nations poll last fall, more than half the Afghan respondents said the police are corrupt. Police commanders have been implicated in drug trafficking, and when U.S. Marines moved into the town of Aynak last summer, villagers accused the local police force of extortion, assault, and rape.
. . .