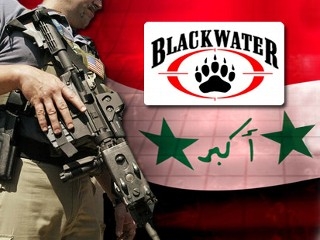 This billion-dollar contract will be the linchpin of a training program for the Afghan National Police, who are theoretically to be drilled in counterinsurgency tactics that will help defeat the Taliban and bring security to impoverished, war-torn Afghanistan. The program is also considered a crucial component of the Obama administration’s plan for turning the war around. Ironically, Xe was poised to win the contract until a successful appeal by DynCorp last week threw the field wide open.

Some people in the U.S. government (and many outside it) believe that this task should not be assigned to private contractors in the first place. Meanwhile, many police experts are certain that it hardly matters which company gets the contract.  Like so many before it, the latest training program is doomed from the outset, they believe, because its focus will be on defeating the Taliban rather than fostering community-oriented policing.
. . .

Absurd as it may sound, this program is considered better conceived than many of the older training programs the Afghan government launched with U.S. funding. For example, a 2006 attempt to induct 11,000 villagers into a new organization dubbed the Afghan National Auxiliary Police -- with only 10 days of training from DynCorp and international military mentors -- was a complete and abysmal failure. One-third of the trainees in certain southern provinces, given a gun and a uniform, were never seen again. Two years later, in September 2008, the project was terminated.

A 2008 report by the well-respected International Crisis Group pointed out that such rapid-induction programs had the perverse effect of actually lowering the average literacy rate and effectiveness of the Afghan police force -- and that’s without even considering the security problems created by those drop-outs with guns.
. . .
In another glaring example of what a lack of resources has led to, Hazeb Emerging Business, an Afghan company hired to maintain the force’s weapons, used hammers and nails to “repair” grenade launchers, because they had no idea how to fix donated weapons. In perhaps the most widely reported mishap, AEY Inc., based in Florida, and described by the New York Times as “a fledgling company led by a 22-year-old man whose vice president was a licensed masseur,” dispatched to the Afghan security forces 100 million Chinese cartridges, some 40 years old and in “decomposing packaging,” under a $10 million Pentagon contract.