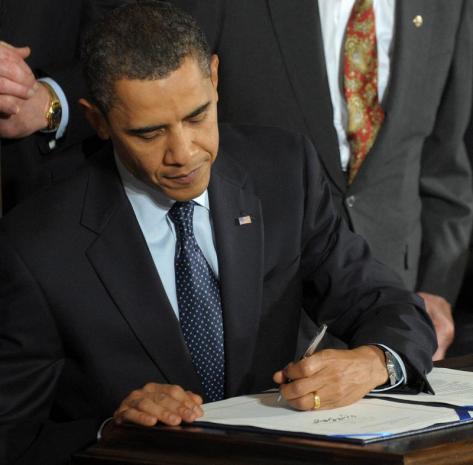 President Barack Obama faces a fight over the health-care overhaul from states that sued today because the legislation’s expansion of Medicaid imposes a fiscal strain on their cash-strapped budgets.

Florida, Texas and Pennsylvania are among 14 states that filed suit after the president signed the bill over the constitutionality of the burden imposed by the legislation. The health-care overhaul will make as many as 15 million more Americans eligible for Medicaid nationwide starting in 2014 and will cost the states billions to administer.

States faced with unprecedented declines in tax collections are cutting benefits and payments to hospitals and doctors in Medicaid, the health program for the poor paid jointly by state and U.S. governments. The costs to hire staff and plan for the average 25 percent increase in Medicaid rolls may swamp budgets, said Toby Douglas, who manages the Medicaid program for California, which hasn’t joined the lawsuits.

“The states are coming through the worst fiscal period in the history of record keeping,” said Vernon Smith, a former Medicaid director for Michigan and now a principal at the research and consulting firm Health Management Associates in Lansing, Michigan. “Medicaid is the most significant, most visible and most costly part of this expansion and states fully expect to see increases in their spending.”

For California, with a $20 billion budget deficit, the extra load will cost at least an additional $2 billion to $3 billion annually, said Douglas, chief deputy director for California’s health care programs. He said the overhaul is currently projected to add 1.6 million people to the 7 million enrolled in his state’s program.

“We face enormous challenges just sustaining our existing program,” said Douglas in a March 18 telephone interview. “I just don’t see states having the capacity to move forward on these changes in this environment.”

The numbers of new enrollees because of the overhaul are based on current estimates and may be low, he said in an e-mail. The estimate doesn’t incorporate the growth that the program, known in California as Medi-Cal, may experience even without the new federal legislation, he said.

Douglas’s state is battling in court over Medicaid spending cuts it tried to make this fiscal year. The Ninth U.S. Circuit Court of Appeals on March 3 barred California from reducing payments to doctors and hospitals, saying federal law required states to maintain “equal access to basic health care” for the poor. California is appealing the decision to the U.S. Supreme Court.

The federal government mandates that states provide health coverage under Medicaid to children, pregnant women, and the elderly and disabled poor. States set the rules on eligibility and decide which benefits to provide, making for a complex hodge-podge of coverage standards across the nation. The health- care overhaul simplifies the system by setting a minimum national floor and requires that all states cover childless adults, who will make up almost all of the expansion enrollees.

Medicaid spent more than $344 billion in 2008, about 15 percent of total national health-care expenditures that year, according to the Centers for Medicare & Medicaid Services, which administers the program. It currently covers 60 million, about the same as Medicare, the federal program for the elderly and disabled, according to the Kaiser Family Foundation in Menlo Park, California. The U.S. government covered about 57 percent of Medicaid’s cost in 2008, the foundation said.

Florida will have to spend an additional $1.6 billion for Medicaid and hire 1,000 new workers to accommodate the overhaul, the state’s Attorney General Bill McCollum said yesterday in Orlando, Florida.

“This is a bad bill,” he said. “That’s a political determination and a practical one.”

The complaint posted on the Florida attorney general’s Web site called the legislation an “encroachment on the sovereignty of states,” and said Florida will be asked to “broaden its Medicaid eligibility standards to accommodate upwards of 50 percent more enrollees.”

Besides the added Medicaid costs, the states are also challenging the right of the federal government to impose a mandate requiring individuals to buy health insurance. Virginia Attorney General Ken Cuccinelli, whose state filed a separate lawsuit today challenging the law, called the health legislation an “unconstitutional overreach” of the federal government’s authority.

Nancy-Ann DeParle, director of the White House Office of Health Reform, said the president isn’t “concerned” about the potential legal challenges. Congress has the “inherent authority” to mandate coverage under the commerce clause that allows the federal government to regulate interstate commerce, she told Bloomberg Television yesterday.

The historic health-care bill, which the House passed March 21 after 13 months of debate and discord, marks the biggest expansion of health coverage since enactment of Medicaid and Medicare in 1965. Obama signed it into law today.

The House on March 21 also passed legislation amending the overhaul, expanding the number of those who will be covered by insurance and raising the total cost to $940 billion. The Senate is scheduled to take up these amendments this week. The package of bills would increase the number of Americans insured by 32 million, raising the portion of people under the age of 64 with insurance to about 94 percent.

The bills raise the threshold for people to qualify for Medicaid to 133 percent of the federal poverty level, which was $22,050 for a family of four and $10,830 for an individual for the 48 contiguous states in 2009, according to guidelines set by the Department of Health and Human Services.

The biggest challenge states face is dealing with a program where the growth in annual spending regularly exceeds the growth in state revenue, said Smith of Health Management Associates.

“It has been a very, very difficult period for the states,” Smith said. “They had to cut spending at a time when significantly more people needed it.”

Most states have confronted drops in revenue since the beginning of the recession in late 2007 as tax collections fell for an unprecedented fifth straight quarter by the end of December last year, according to the Nelson A. Rockefeller Institute of Government in Albany, New York. In the first nine months of 2009, states suffered the biggest decline in revenue ever recorded.

In fiscal 2009, Medicaid enrollment increased a record 3.29 million nationally, with another rise of 1.29 million the year before, based on reports compiled for the Kaiser foundation.

Medicaid spending accounts for about 22 percent of state spending, according to the National Governors Association, which said it doesn’t expect revenue to return to pre-recession levels until at least 2014. Budget directors estimate the fiscal 2011 budget gap could expand to $102 billion and may even reach $180 billion, the Kaiser study said. States by law, unlike Washington, must balance their budgets.

“In the past, Medicaid was only as strong as its weakest link,” said Stephen Somers, president of the health-policy nonprofit Center for Health Care Strategies Inc. in Hamilton, New Jersey. “ Now, there is the first universal floor and it will form the foundation for universal coverage.”