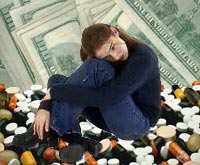 to keep up that pace, according to the report released this week by the Agency for Health Care Administration. Altogether in the six years from 2004-09, he issued nearly 285,000 prescriptions, the AHCA report showed.

However, AHCA noted that that total counts a refill as a prescription. The agency said its report does not conclude that Mendez-Villamil's prescribing is improper; its investigation continues.

Mendez-Villamil’s status as the most prolific prescriber in the state was already known, based on a report released in December of a 21-month period in  2007-09. But that period was mild compared to the years before, the new data show, and a timeline suggests that the prescribing slowed down markedly after the state began implementing computer tracking and other controls.

His highest-prescribing year in the period studied was 2004, when he issued about 62,400 prescriptions that cost Medicaid $12.2 million, according to the chart. The number of patients: that year: 2,695. A quick calculation shows that he issued 23 prescriptions (or refills) per patient, for a total of more than 1,200 pills apiece.

Sen. Don Gaetz, chairman of the health regulation committee, said Mendez-Villamil “appears to be taking advantage of the taxpayers of Florida and draining money away from legitimate patients. He should be the poster boy for tougher enforcement actions.”

Gaetz said he will ask sharp questions of AHCA officials at a hearing in Tallahassee on Tuesday because he senses that lawmakers have been "slow-rolled" -- repeatedly reassured that problems in Medicaid will be fixed, only to see little progress.

"We need to be all over this guy" Mendez-Villamil, said Gaetz, R-Niceville. "We ought to be looking over his shoulder."

AHCA, which conducted the in-depth review of the psychiatrist's prescribing at Gaetz's request, released the results to Health News Florida as part of a broader freedom-of-information request.

Mendez-Villamil, reached by phone on Thursday, said his attorney had asked him not to speak to the media. The attorney, Robert Pelier of Miami, said he had not seen the report and questioned why AHCA was “willing to share that information with you and not me.”

Pelier suggested that AHCA was trying to pressure psychiatrists to stop prescribing “atypical antipsychotics,” which are more expensive than older drugs for treating severe mental illness. When told of the results of the review, Pelier said, “Based on the amount of patients he sees, it’s well within normal range.”

Mendez-Villamil’s status as high-prescriber came to light in mid-December when The Miami Herald named him as the psychiatrist targeted in a letter of protest to federal Medicaid officials from Sen. Charles Grassley, R-Iowa, chair of the Senate Finance Committee.

Grassley had learned of the psychiatrist from a report by the University of South Florida’s behavioral therapy experts, who were commissioned to profile prescribing patterns from the last half of 2007 through the first quarter of 2009. That report did not have names, but the Herald obtained the name through other AHCA records.

In an interview, Mendez-Villamil told The Herald in December that he prescribes only what is necessary. His practice style – seeing patients for 10 minutes every two or three months for medication checks – enables him to handle a large caseload, and many patients are on four or five different drugs, he said.

“When you know the patient, and the patient is stable, 10 minutes is long enough,” the Herald quoted him as saying.

The mental health drugs that he frequently prescribes are expensive even at the online Drugstore.com, the Herald noted: Zyprexa, about $842 a month for 30 days; Abilify, $634; and Seroquel, $430.

AHCA noted in its response to Gaetz that the psychiatrist is one of several “top prescribing outliers" who are under investigation by the agency’s Bureau of Medicaid Program Integrity.

The agency referred a complaint about Mendez-Villamil to the Attorney General’s Medicaid Fraud Control Unit in 2007, a timeline shows, and a spokeswoman for that office said the investigation is still ongoing. In 2008, AHCA began to require prior authorization for prescriptions of certain pricey medications that the agency suspected were over-prescribed.

Mendez-Villamil’s prescribing dropped off sharply between 2004 and 2009, the AHCA chart shows. While some of the dropoff came with a reduction in the number of patients he saw by about one-fourth, the quantity of drugs plummeted by two-thirds – from 3.3 million a year in 2004 to 1.1 million in 2009.

When it comes to psychiatric medications, AHCA is under pressure from many directions: Some patient advocates fear there is over-prescribing to keep Medicaid patients docile, and that the danger is especially great with children, particularly in foster care. They point to last year's suicide of a 7-year-old foster child who was on such medications, a death that led to a continuing series of meetings to hash out drug guidelines for children.

At the same time, patient advocacy groups fear money concerns will influence the state to cut back on the costliest drugs even when they're needed, especially at a time when Medicaid spending is exploding and the state faces a deficit of more than $2.6 billion.

Meanwhile, drug-industry lobbyists push for inclusion of the costliest new drugs on the state formulary of medications that can be prescribed without "prior authorization."

The Tragedy of David Dorn! Liberals Pay Attention to the Hypocrisy

Cops CAUGHT Bringing BRICKS To Protest?! - Are Agents Behind The CHAOS?