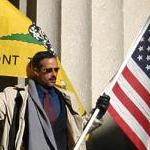 Last spring the state of Missouri released a document called the MIAC report basically saying libertarians, gun owners, supporters of Ron Paul, Chuck Baldwin, and Bob Bar were all terrorists. It even included people who had bumper stickers that said don’t tread on me, or anything that was a dissenting opinion on the government. The document was leaked, and due to the strong support on the internet the MIAC report fell into oblivion.

2 Comments in Response to The establishments bag of dirty tricks

Do Tea Party participants believe they will be spared from this Fascist Legislation?

"It's sobering to reflect that one of the best ways to get yourself a reputation as a dangerous citizen these days is to go around repeating the very phrases which our founding fathers used in the struggle for independence." -- Charles A. Beard

Thinking About Libertarian Resistance During the Statist Deluge