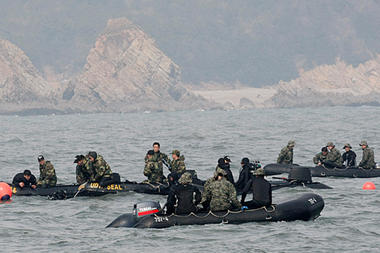 Seoul, South Korea
Efforts to enter the hull of the sunken South Korea Cheonan warship were foiled Tuesday by strong underwater currents, dimming hope for the survival of the 46 sailors thought to be trapped inside.

Divers worked throughout the day to no avail trying to gain access to the Cheonan, a Navy corvette that was blown in two Friday night in a mysterious explosion and now sits 40 meters under water. Fifty-eight other sailors were pulled from the ship as it sank near the disputed Yellow Sea border with North Korea.

An estimate for when survivors inside the broken ship would run out of air passed Monday night, but rescuers were continuing to pump oxygen inside the vessel, hoping to extend the window.

One South Korean rescue diver died aboard a US Navy ship after having difficulty breathing, the BBC reported. A spokesman for US Forces Korea could not immediately be reached to confirm. The USNS Salvor, a salvage ship, was in the area to aid the rescue effort.

As the rescue effort entered its fifth day, politicians began to raise questions about the nation’s response to the tragedy.

A floating crane that could lift the stern of the 1,200-ton vessel, where most of the sailors are believed to be trapped, was not dispatched until Monday and likely won’t arrive at the site of the wreckage until the weekend.