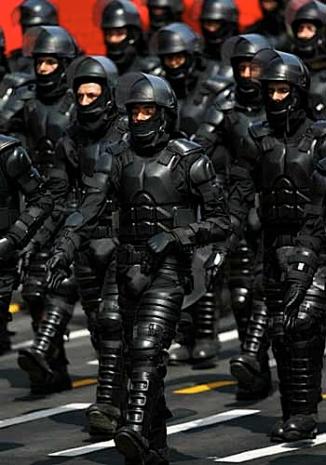 In her bestselling End of America, Naomi Wolf outlines the 10 warning signs that America is headed toward a fascist takeover. Using historical precedents, she explains how our government is mimicking those of Mussolini, Hitler and Stalin through practices like surveillance of ordinary citizens, restricting the press, developing paramilitary forces and arbitrarily detaining people.

The book was lauded by liberals under Bush: the Independent Publishers gave it the Freedom Fighter Award; the Nation named it the best political book of 2007. Now, under President Obama, Wolf's book is providing ammunition for the Tea Partiers, Patriots, Ron Paul supporters and Oath Keepers, who also warn of impending tyrannical government. Even when the book first came out pre-Obama, Alex Jones, Michael Savage and Fox News invited her on their shows, and agreed with her.

It's not just her message. She speaks their language, referring to the Founding Fathers and American Revolution as models, admitting to a profound sense of fear, warning of tyranny, fascism, Nazism and martial law. When Glenn Beck warns of these things we laugh. When Wolf draws those same connections, we listen. How can both sides be speaking the same language, yet see things so differently? Or are we just not listening to each other? I telephoned Wolf to ask her what it means when your book ends up bolstering policies you oppose.

Justine Sharrock: First off, is your book still relevant under Obama?...

The Democrats Have Created a Nazi State in America