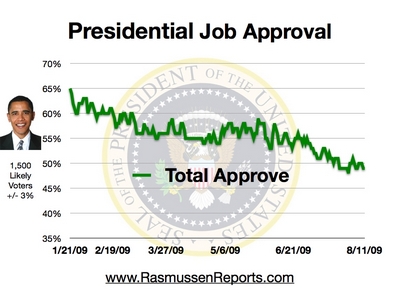 Last week's jubilant signing of the health care overhaul, Obama's signature domestic initiative, seems to have given the president little boost. Instead, his standing on four personal qualities has sagged, and 50% of those surveyed say he doesn't deserve re-election.
USA TODAY/ GALLUP POLL: USA fumes over politics
"People are still hurting; a lot of people are still struggling, and I think a lot of what we're seeing in the polls reflects people's views on the economy," says Rep. Chris Van Hollen, head of the Democratic Congressional Campaign Committee.
"At the same time, things have been improving. Clearly the economy is growing again," Van Hollen said. "I believe that if we begin to see positive job growth, people's confidence will return and that will change the dynamic."
In the survey last Friday through Sunday, the president gets tough treatment:
• Obama's standing on four key personal qualities, including being a strong and decisive leader and understanding the problems Americans face in their lives, has dipped. For the first time since the 2008 campaign, he fails to win a majority of people saying he shares their values and can manage the government effectively.
• Twenty-six percent say he deserves "a great deal" of the blame for the nation's economic problems, nearly double the number who felt that way last summer. In all, half say he deserves at least a moderate amount of blame.
The blame directed at his predecessor, former president George W. Bush, hasn't eased, however: 42% now give Bush "a great deal" of blame, basically unchanged from 43% last July.
• By 50%-46%, those surveyed say Obama doesn't deserve re-election.
Obama's approval rating on handling the economy, foreign affairs and the federal budget deficit hasn't significantly changed from February. It has risen a bit on health care, though he doesn't get majority approval on any of the categories.