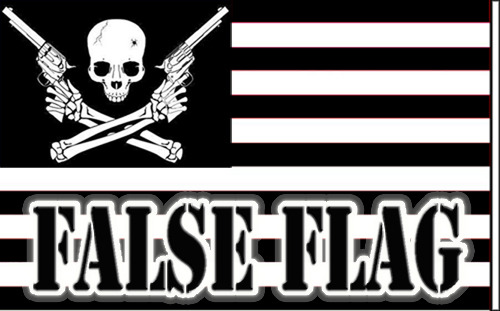 The FBI is warning police across the country that an anti-government group's effort to remove governors from office could provoke violence.

The group, called the Guardians of the free Republics, wants to "restore America" by peacefully dismantling parts of the government, according to its Web site. It sent letters to governors demanding that they leave office or be removed.

I don't get it.  I'm not anti-govt, but I am anti-DC Corportation that has been posing as a "government" for the past 150 years.  But how does attacking the governors of sovereign states do anything to free the people and their state, when it is DC that has the illegal UN-Constitutional choke hold on all the states and the people  ?  You'd think they would go after the real culprits in DC that is forcing their OWG  Dictatorship on us all !

I don't think any of this is real because it makes no sense whatsoever.  Looks like another DC false flag to me trying to get the public to turn against all militias, when militias even pre-ceded the Constitution, and our Founders ordered all states  and communities  to have them !  DC cannot have ANY  legal control over ANY militias since they were the very first backbone of America; militias pre-date DC itself.  All these DC Federal raids they are doing are also ALL totally illegal and UN-Constitutional, - as legally and Constitutioanlly NO FEDERAL AGENT HAS ANY JURISTRICTION OR AUTHORITY OUTSIDE OF THEIR OWN  10-MILE SQUARE DC BORDERS !  NO Fed is legally allowed to BE IN any state unless the Sheriff or governor has invited him for a specific time and event.

Whenever any Fed raids a home or business, they are acting only as criminal  thug thieves and nothing more - their badge means nothing outside of DC !  They just don't want you to know that.  Study REAL Constitutional law and you will learn just how restricted the DC entities really are !  And you will see how they have treasonously taken over everything by threat and  terrorism, not real  law.  They make up 'laws' as they go along to cover themselves just announcing 'new laws' that they 'expcet' you to obey - but no one has any obligation to obey anything out of DC ! They do not rule over the entire country as they have indoctrinated y'all to believe !  DC's true power and authority ends at THEIR DC BORDERS !

The PEOPLE just have to learn how to grow a backbone and stand up to them and treat them like any other criminal who tries to break into their home to steal, or trespass onto their property !  The people  need to learn how to STOP BEING INTIMIDATED so easily by all the propaganda going out to them via the govt media.  Most all you hear repeorted on TV media is all created propaganda and none of it true as they present it. It's all part of the mind-molding of the public  that is the media's job.

I don't even HAVE  TV anymore.  Got rid of cable and just watch what I myself taped over the years.  You only get true news via the computer Internet anyway, so why be indoctrinated with the Govt TV media that only feeds you  govt lies anyway ?!

I know many who have had their TV truned off, espeically after the take-over by DC of all the airwaves last year.  WE are forced to have Govt schools, Govt media, Gov't laws, Govt controls over every breath we take - who needs or wants  it ?  This dictatorship cannot force you to listen to their TV media propaganda - that is the only one thing you still have in your control - you can have it shut off !

More and more are doing so daily !  It is one way to cut the controls  DC has over your mind !  THEY control all the airwaves and TV .  THAT you can shut off !

But as for getting rid of all governors that makes no sense at all for freedom.  I can 'see REPALCING mosat of them, to get real peoel in there instead of the DC puppets, but getting rid of DC makes more sense.  We do not need or want DC at all !  All they are is a criminal extortionist corporation that is a choke chian aruodn all our throats !  THEY live off us like leeches and that is Treason.  In fact every single thing DC has done for the past 150 years has been Treason !  They made Treason the 'norm'  instead of the  public hanging crime it is !!  If you learn and study our Founders real laws that they established for America, you will find that no one is to be paid for their service to the country and the people; only thier expenses are to be paid for and most past Presidents even paid for those themsleves !  NONE of this self-giving of raises every year (Treason) ; NONE of this special medical care insurance for govt hot shots (Treason) ; NONE of this special Air Force One and Lemo's everywhere (Treason & extortion & fraud) [with the computer system no one has to travel for meetings at all anymore !] ;  NONE of this having assisstants and special body guards or secret service (Treason and Extortion) ; NONE of this controlling schools and education (Treason);  NONE of this national health care system (Treason) ;  the list goes on but you get the point.  The people have been had and USED all the way around. NO one is suppose to get rich by their public SERVICE like the thugs in DC have been doing for years ! The Founders made it very clear all govt service persons were to have their own source of income; they were NOT TO LIVE OFF THE PEOPLE or use their position in anyway to make money !  That includes all those hundreds of thousands of $$ presidents make for speeches after they leave office - this is also called Treason by our Founders.  If the public knew our REAL TRUE HISTORY and REAL TRUE LAW OF OUR FOUNDERS, they would be shocked on how they have been so programmed into the OWG system long ago and don't even know it !  Lincoln is who first established the Marxist system you still live in today!  He did a complete coup de tat on our Founders Free Republic and REPLACED it with his own new Marxist system !  Shocked ?  Everything the people have been told by the pretend govt in DC has been LIES !  The public has NEVER been told the truth about ANYTHING yet by DC !  That is why we all call DC the true name of District of Criminals !  THEY ARE !

I never call it "Washington" as that is an insult to the first president under the Constitution, and the father of this once Free Republic that America was.

Little TRUE  history lesson for ya there just to give you a touch of REAL history that no one in Amreica has ever been allowed to be taught in the Un-Constitutional Federal Govt schools..  Washington was not the 'first president', there were 16  presidents before him !  In the Govt schools you only get taught what THEY want you to believe, but NONE of it is truth !

Want some more shocking TRUE history they do not want you to know about  ?

Can you take it ?

How about how and when Marxism Communism really began in America ? And how you have been taugt and indoctrinated to call it "freedom" !  And this is just the tip of the iceberg !  Oh if the public really knew what has been done to them !  But they will; never admit to the truth becuae if they did, there woudl be a total rebelion tomorrow and a public lynching that would make history !  None of the past Founders public lynchings would even compare to it !  But the Founders made it very clear that a public lynching was the ONLY punishment for Treason !  I notice some PC lawyers are trying to even change that !

My vote goes to the SPLC as the culprit. What a stroke of genius! For the cost of $25 in stamps, they can demonize their opposition and raise millions of dollars!

What I immediately noted from reading several news stories that inferred sovereign groups sent the “letters” is that historically U.S. sovereign groups have never before mass targeted government in this manner, mailing threats e.g., to 50 state governments. Sovereign groups generally focus on specific issues in regions then fan the flames metaphorically speaking to promulgate an ideological stance. Sending letters to 50-state governments looks more like the work of idiots or a propagandist in a hurry to influence national pubic opinion against any person or group that might share beliefs alleged similar with sovereign groups, for example groups that oppose taxes.

Wow.  We loved this AP story so much we reported it four times in less than 24 hours...twice by the same reporter.

As I think of American Idol I think about all the violence Hollywood has provoked against innocent televisions.

And then I thought about how most of this started happening when we started importing Japanese televisions, indicating our clear cultural bias against anything alien.

I smashed a Japanese television once and then a Japanese car. In fact I've smashed all kinds of Japanese crap without compunction or regret.

FBI, it's guys like me you really have to watch out for. I gotta history.

Yes, the letters could provoke violence by 'some' people.  So what?