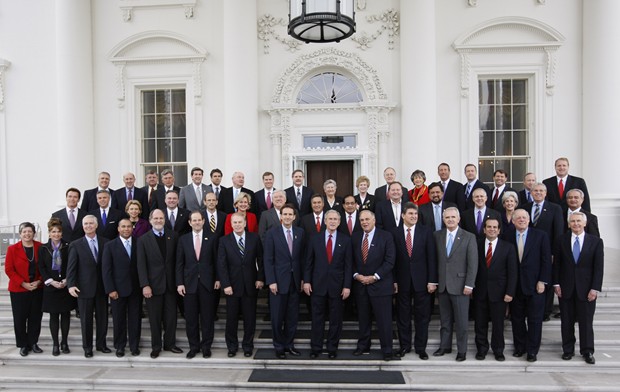 The FBI is warning police across the country that an anti-government group's effort to remove governors from office could provoke violence.

The group, called the Guardians of the free Republics, wants to "restore America" by peacefully dismantling parts of the government, according to its website. It sent letters to governors, demanding they leave office or be removed.

Investigators do not see threats of violence in the group's message, but fear the broad call for removal of top state officials could lead others to act out violently. At least two states reinforced security in response.

Minnesota governor Tim Pawlenty, a Republican, said he received one of the letters but was not overly alarmed.

"We get all kinds of, shall we say, 'interesting' mail, so it's not out of the norm," Pawlenty said on Friday. "It got more attention because it went to so many governors."

As of Wednesday, more than 30 governors had received letters saying if they do not leave office within three days they will be removed, according to an internal intelligence note by the FBI and the Department of Homeland Security. The note was obtained by AP.

1 Comments in Response to Governors get letters, FBI issues alert

How do we know this story is true?  Has anyone here ever heard of a group called "Guardians of the Free Republics" before?  How do we know that these letters weren't sent by FBI agents practicing a little False Flag propaganda, or CoIntelPro activity?  Haven't we seen such stunts before?

Likewise, the politician that voted for ObamaCare who claimed that one of the protesters spat on him and called him a "nigger" -- yet none of the hundreds of people present saw or heard this happen, and none of the hundreds of cameras and microphones present picked it up.  Likewise, another pro-ObamaCare politician who claimed that "Tea Partyers" threw a brick through the front door of his office -- yet there's no evidence whatever as to just who threw the brick;  it could have been a passing drunk, a bottom-feeding reporter hoping to create a story, or even a member of the politician's own staff hoping to get him attention.

What we do know is that the mainstream media -- yea, even Fox News -- has been trumpeting piously about "violence" from the "anti-government movement".

This has all the earmarks of a government slander campaign, and we must come up with tactics to deal with it -- quickly.