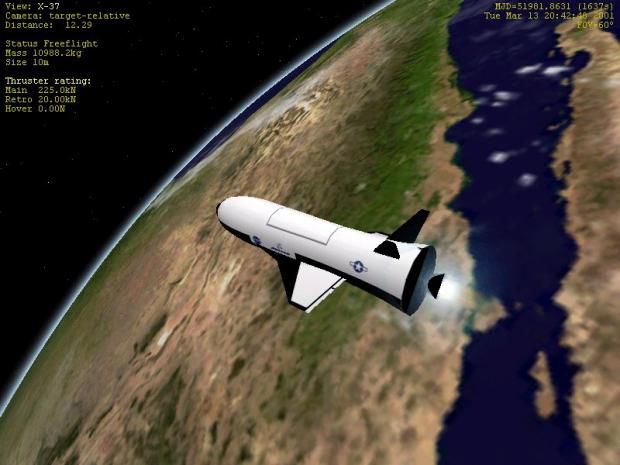 An artist's rendering of the original design for the X-37 spaceship in 1999, when it was still a NASA project. Now an Air Force program, the X-37 is set for its first test flight April 19.
Newscom
Enlarge


The Air Force has announced that an experimental spaceship that looks and acts like a miniature, unmanned space shuttle – riding the back of a rocket into space then returning to Earth to land in California – will launch for the first time this month.
How long the mission will last, what it hopes to accomplish, and what, exactly, the X-37B Orbital Test Vehicle is designed to do are all mysteries.
At a time when more countries – and particularly China – are exploring the military uses of space, the vehicle is the subject of speculation in the space community, with some wondering why the Pentagon rescued a program that NASA put on the chopping block due to a lack of funding in 2006.
But the program is also drawing attention for what it might accomplish. With space enthusiasts and entrepreneurs constantly looking for ways to drive down the enormous costs of getting people or payloads into orbit, perhaps research by the deep-pocketed Defense Department can start to find solutions.
If it is successful, the program would “be a good demonstrator for a commercial reusable orbital stage, so I'm hoping that something practical comes out of this program,” writes David Riseborough of the blog Earth Space Continuum.
X-37: What is it?
For its part, the Air Force has sought to quell conjecture that the X-37 might be some sort of orbiting Predator drone, dropping weapons from space. It says it needs the sort of craft NASA was developing: a way to bring science experiments and small payloads back to Earth safely without having to send humans into space to do it.
“What it offers that we have seldom had is the ability to bring back payloads and experiments to examine how well the experiments performed on-orbit," Gary Payton, the undersecretary of the Air Force for space programs, told Space.com.
This being the military, however, there are questions about whether that is the whole story. With the Air Force divulging few details about the craft or its mission, even defense experts are unsure about the program. Is this a protoype of what will become a fleet of Air Force spaceships or is it an end in itself?
"From my perspective it's a little puzzling as to whether this is the beginning of a program or the end of one," Peter Wilson, an analyst at the RAND Corp., a defense consultancy in Washington, told the Associated Press.
NASA taking note
The X-37 is roughly one-fourth the size of the space shuttle and though it will return to Earth, it is not completely reusable, like the shuttle is. All the elements of the shuttle are recovered and reused. The X-37 will take off from Cape Canaveral in Florida atop an expendable Atlas V rocket.
The date for the X-37 to make its automated landing at Vandenberg Air Force Base on the California coast was not announced. It can stay on orbit for three-quarters of a year.
Air Force press materials suggested the mission is intended to put the vehicle through its paces but did not offer specifics. NASA will be watching to see what the Air Force has learned.
"We stay connected with the Air Force on the thermal protection system, [and] on the guidance, navigation and autonomous re-entry and landing," Daniel Dumbacher, the former X-37 project manager at NASA's Marshall Space Flight Center in Huntsville, Ala., told Space.com. "We stay in touch with them for data-sharing purposes, but that's the extent of it."