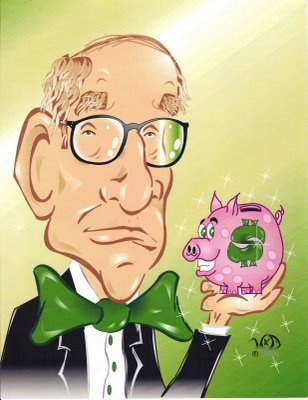 Well it looks like the one thing you can count on from Alan Greenspan is to be consistent, consistently partisan that is. Whenever a Democrat is in the White House deficits matter and when a Republican is in office, they don't. Now that a Democratic is back in office, Greenspan is concerned about the deficit if the health care bill wasn't scored properly by the CBO.

TAPPER: The president signed massive health care reform legislation into law a few weeks ago. You have expressed concern about the legislation, as it was making its way through the process, about whether or not it did enough to contain costs. What did you think about the final legislation? Does it contain costs enough?
GREENSPAN: Well, the CBO, incidentally, Congressional Budget Office, which is really a first-rate operation, says that it does. The problem is not their estimates, but the range of potential error in those estimates.
And when you're dealing with an economy in which debt is becoming -- federal debt is becoming ever increasingly a problem, it strikes me that when you're dealing with public policy and you're in a position where you have to ask yourself, "What happens if we are wrong?"
In other words, in the case now, where our buffer between our capacity to borrow and our actual debt is narrowing, for the first time, I think, in the American history, there's a question, supposing we are wrong on the cost estimates, and, indeed, they are actually much higher than the best estimates can generate, the consequences are very severe, whereas if they are too high, it's very easy to adjust.
So I think it's -- it's -- there's an issue over and above the question of what's the best cost estimate. There's a policy strategy here which I think requires us to lean in an ever more conservative area with respect to judging...
(CROSSTALK)
TAPPER: So it might have been too rosy, the projections, you're saying?
GREENSPAN: Possibly. I don't know that. But I do know that the probability that it might be is much higher than we would like.

You're Being Scanned! In More Ways Than One...

Why China's economy is worse than you think (the three "Ds")