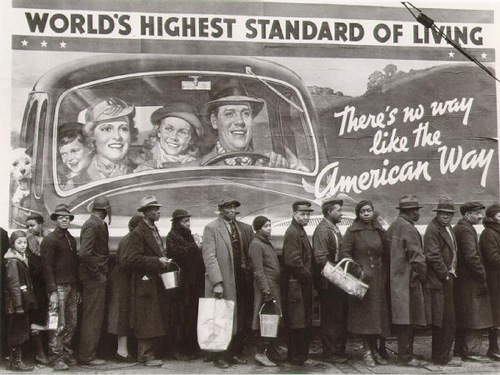 I don't even know what to say about this. It's as if companies think by outsourcing practices like these, their hands are clean. Companies are sitting on a mountain of cash, refusing to hire people - and now we learn of an industry meant to prevent laid-off workers from collecting even bare-bones benefits?
I'd say they should be ashamed, but apparently the corporate world doesn't do shame:

WASHINGTON — With a client list that reads like a roster of Fortune 500 firms, a little-known company with an odd name, the Talx Corporation, has come to dominate a thriving industry: helping employers process — and fight — unemployment claims.
Talx, which emerged from obscurity over the last eight years, says it handles more than 30 percent of the nation’s requests for jobless benefits. Pledging to save employers money in part by contesting claims, Talx helps them decide which applications to resist and how to mount effective appeals.
The work has made Talx a boom business in a bust economy, but critics say the company has undermined a crucial safety net. Officials in a number of states have called Talx a chronic source of error and delay. Advocates for the unemployed say the company seeks to keep jobless workers from collecting benefits.
“Talx often files appeals regardless of merits,” said Jonathan P. Baird, a lawyer at New Hampshire Legal Assistance. “It’s sort of a war of attrition. If you appeal a certain percentage of cases, there are going to be those workers who give up.”
When fewer former workers get aid, a company pays lower unemployment taxes.
Wisconsin and Iowa passed laws to curtail procedural abuses that officials said were common in cases handled by Talx. Connecticut fined Talx (pronounced talks) and demanded an end to baseless appeals. New York, without naming Talx, instructed the Labor Department staff to side with workers in cases that simply pit their word against those of agents for employers.