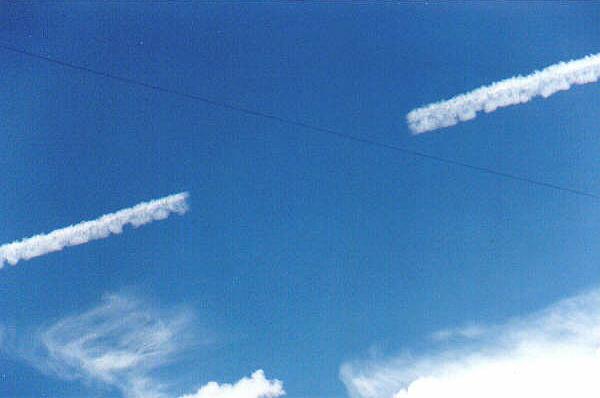 Subject: aircraft condensation trails which no longer only contain water but cause persistent milky veils, possibly due to the presence of barium, aluminium and iron

1) Is the Commission aware that, since 1999, members of the public in Canada and the USA have been complaining about the growing presence in the air of aircraft condensation trails of a new type, which sometimes persist for hours and which spread far more widely than in the past, creating milky veils which are dubbed 'aerial obscuration', and that the new type has particularly come to people's attention because it is so different from the short, pencil-thin white contrails which have been a familiar sight ever since jet engines came into use and which remain visible for 20 minutes at most and can only be produced if steam condenses on dust particles due to low temperatures and high humidity?

2) Is the Commission aware that investigations by these complainants, observations by pilots and statements by government bodies increasingly suggest that what is happening is that aircraft are emitting into dry air small particles consisting of barium, aluminium and iron, a phenomenon which in public debate in America has come to be known as chemtrails?

3) Unlike contrails, chemtrails are not an inevitable by-product of modern aviation. Does the Commission know, therefore, what is the purpose of artificially emitting these Earth-derived substances into the Earth's atmosphere? Does it help to cause rain, benefit telecommunications or combat climate change?

4) To what extent are aerial obscuration and chemtrails now also being employed in the air over Europe, bearing in mind that many people here too are now convinced that the phenomenon is becoming increasingly common and are becoming concerned about the fact that little is so far known about it and there is no public information on the subject? Who initiates this spraying and how is it funded?

5) Apart from the intended benefits of emitting substances into the air, is the Commission aware of any possible disadvantages it may have for the environment, public health, aviation and TV reception?

6) What is being done to prevent individual European states or businesses from taking measures unilaterally whose crossborder impact other States or citizens' organisations may regard as undesirable? Is coordination already taking place with regard to this? Is the EU playing a part in it, or does the Commission anticipate a future role, and what are the Commission's objectives in this connection?". (Avionews)
(006)

Live updates: U.S. Capitol is on lockdown as protesters clash with police and breach the building