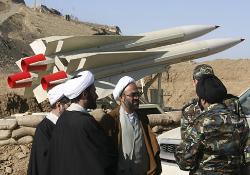 [I'd like to see the sources of all his "data"]

A Jewish author, Primo Levi, was once asked what he had learned from the Holocaust. He replied, “When a man with a gun says he’s going to kill you - believe him.”

At this moment, Iranian President Mahmoud Ahmadinejad, a man who, in the same breath, both denies the Holocaust ever occurred, and then threatens to make it happen again, is arrogantly holding a gun with which he vows to wipe the state of Israel off the map.

But where is the Obama Administration?

Israel remains the truest friend America has in this world, and our two nations need each other now as much as we ever have; because a nuclear Iran represents a threat to the paradigm of freedom for the entire world. It also represents a truly fundamental, existential threat to the state of Israel.

Yet, in recent days, Israel has received more open rebuke from the Obama administration for plans to build houses in Jerusalem than Iran has received for building a secret uranium enrichment facility to build nuclear weapons that would threaten the entire world.

Israel's enemies and ours see such open criticism as a weakening of the Israeli-American alliance, and an opportunity to boldly advance violence against Israel and the hegemony of our common enemies in the Middle East— most notably, Iran.

With each well documented new discovery by the International Atomic Energy Agency over the last several years, Iran has dramatically shifted its stories about its uranium enrichment efforts. In the beginning it had claimed it had no centrifuge program at all.

When we discovered Iran had its first operational centrifuges (fewer than 150 in back 2005), I began calling for Iran to be referred to the U.N. Security Council because it was becoming obvious to reasonable and unbiased observers that it was Iran's true intent to ultimately develop nuclear weapons. That was five years ago.

Today, the Iranian program includes over 8,000 centrifuges. A total of only 3,000 centrifuges is the commonly accepted figure for a nuclear enrichment program that can be used as a platform for a full industrial-scale program capable of churning out enough enriched uranium for dozens of nuclear weapons.

Iran has also begun to enrich uranium to 20 percent, which is four times the amount necessary for peaceful domestic energy production. It also means that they are 70% of the way to weapons grade uranium capable of fueling nuclear warheads.

The regime has built underground enrichment facilities at Natanz and the newly discovered secret underground facility at Qom, and they continue to test medium- and long-range ballistic missiles that could be used to deliver a nuclear payload.

The IAEA reports that Iran has already manufactured enough uranium hexafluoride to ultimately build at least 20 nuclear warheads.  It has also been reported that Iran has now experimented with polonium. Polonium is a radioactive isotope with only one known purpose on earth: to trigger a nuclear explosion.

This overwhelming evidence, along with Iran's languishing economy and literally centuries' worth of natural gas reserves, makes Iran's claim that it seeks nuclear capability solely for peaceful purposes ridiculous beyond my ability to express.

Iran is the world's largest state sponsor of terrorism and continues brazenly to provide support to its proxies, including Hamas, Hezbollah, and other jihadist terror groups. It should send a chill down our spines to consider that the same willingness Iran has demonstrated to proliferate missile technology to its terrorist proxies would undoubtedly also become a willingness to proliferate nuclear weapons technology to terrorists.

Osama bin Laden has called it a religious duty for al-Qaida to acquire nuclear weapons.

Admiral Mike Mullen, Chairman of the Joint Chiefs of Staff, has stated, "My worst nightmare is terrorists with nuclear weapons. Not only do I know they are trying to get them, but I know they will use them."

This is indeed the greatest danger of all. If Iran steps over the nuclear threshold, rogue regimes and terrorists the world over will have access to these monstrous weapons.  No wonder the nation of Israel is concerned.

Israeli Prime Minister Golda Meir said many years ago: “In our long war with the Arabs, Israel has always had a secret weapon: No alternative.”

Today, that reality remains unchanged for the tiny nation that could fit into my congressional district twice.  Israel has very few options and no margin for error. Israel understands that Iran is currently ruled by a regime whose present leaders believe that Armageddon is a good thing, and that it is God’s will for them to annihilate America and Israel.

A responsible Israeli leader facing such a mortal threat  from a nuclear armed terrorist state must and will do whatever is necessary to defend his people. Israel will not walk silently into the gas chambers again.

If and when the people of Israel find themselves with no time left and no choice but to defend themselves by taking preemptive military action to prevent Iran from gaining nuclear weapons, the Obama administration will owe an apology to the whole world for failing to act, but especially to Israel for leaving them with no choice but to act on behalf of all of us.

America and the Western world will then have a moral responsibility to stand with Israel in whatever follows.

Rep. Trent Franks, R-AZ, is a co-founder of the Israel Allies Caucus and is a member of the House Strategic [Nuclear] Forces Subcommittee.

I believe Norman Finkelstein has some excellent points, and I agree. When are militant Israelis going to stop using the Holocaust as an excuse to terrorize its neighbors? It reminds me of a persecution complex. If you treat your neighbors like ...., don't expect olive branches in return.

>> Israel remains the truest friend America has in this world,...

Tell that putrid B.S. to the families of the 34 who died on the USS Liberty when it was attacked by Israel.   Iran wants Israel - let Israel deal with Iran.

Franks is NOT anxious to attack Iran, Franks is anxious to have OUR CHILDREN attack Iran - while he remains back here, safe and sound, enjoying his power lunches and making political hay.

These things do not happen in a vacuum.   They are coordinated, and their minions serve them eagerly: