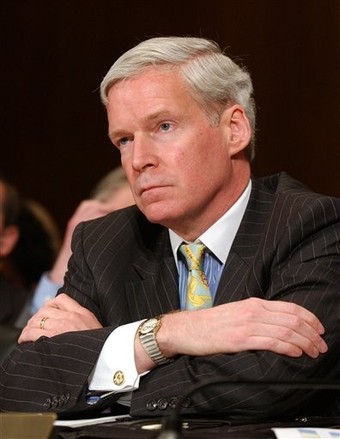 This shows what a utterly corrupt and entrenched organization the Red Cross is to have hired the Former head of the IRS to be the CEO of the worlds largest "Charity".  Give me a break! [Ed]
On May 29, 2007, Mark Everson former head of the IRS became president and CEO of the American Red Cross. Just six months later, he was ousted for engaging in an inappropriate sexual relationship with a subordinate.  Prior to that, Mr. Everson sat down with Charity Navigator president Trent Stamp to talk about his qualifications for the job and to assure America?s donors that he was committed to restoring the world?s best-known charity to glory.  The Red Cross is now looking for Everson?s replacement.


Trent Stamp: Here at Charity Navigator, whenever there is a natural disaster, donors turn to us for advice on who to give to. I was quoted on national TV during the days after both the Tsunami and Hurricane Katrina as saying "Find a charity with a proven track record of success with dealing with a disaster of this size and scope. Even well-meaning new organizations will not have the infrastructure, the experience, and the knowledge of the region to efficiently maximize your gift." This policy of ours has certainly benefited the Red Cross, as your group is invariably one of the non-profits with previous experience responding to disasters of this magnitude, and we have wholeheartedly recommended you in the past. And yet, with you taking over, if we followed the same philosophy, we would be recommending a group with a leader that has no non-profit or disaster-related experience. This seems incongruous to me and hard for me to logically defend. Explain to me why your lack of experience with non-profits and disaster response in particular shouldn't matter to America's donors.

Mark Everson: The way I would look at it is that the Red Cross is a large, complex organization with a series of relationships--there is the headquarters, the chapters, the volunteers, there are dependencies with governments and with private businesses. You could argue that someone with not-for-profit experience would be essential, but there are very few organizations of the size and scale of the Red Cross. You might say that someone could step up from a smaller organization and make that jump.

OK all I really want to know is if he 1090'd the prostitute.

Oil Is Tumbling Amid Oversupply Fears