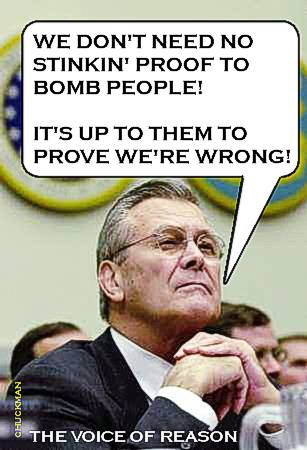 [This is the best solution to the unemployment problem in the US. More military personnel, more contractors, more "war toy" manufacturing activity. So a few innocent foreign civilians get killed -- we have to look at the greater good.  LF]

On the eve of the first visit of Russian Prime Minister Vladimir Putin to Venezuela and the completion of agreements to enhance the defense capacity of the Venezuelan government, Washington moves its pieces to recover military domination in the region. Venezuela is preparing to welcome Vladimir Putin, who will implement several agreements.

These will include the delivery of Mi-17 helicopters and the purchase of 92 Russian T-72 tanks and Smerch multiple rocket launchers, the U.S. aircraft carrier USS Carl Vinson “walks the shores of Peru conducting joint exercises with the Peruvian Air Force and Navy.” The aircraft carrier USS Carl Vinson – the third largest in the Pentagon – is accompanied by an attack fleet consisting of several assault ships, destroyers, air components and anti-submarine helicopters.

Pentagon spokesmen have claimed that Washington carries out these military maneuvers in the region routinely. The U.S. military presence has been increasing alarmingly in the hemisphere since 2006, when Venezuela established defense relations with Russia.

It was then that the U.S. government classified Venezuela as a country “that does not cooperate sufficiently with the fight against terrorism” and imposed a ban on the sale of arms and defense equipment to the country. As a result, the government of Hugo Chavez had to find another partner that was not subject to pressure from Washington. Venezuela, a country then dependent on the Americans, on defense, had two options: allow its military to weaken and the country become unable to defend itself or find other countries not subject to the agenda of Washington who also possess the technological capability to meet its defense needs.

Up until now, Venezuela bought Russian weapons totaling $4 billion, and maintains projects on energy and transfer of technology with the government of Russia to seek closer relations between two mega-producers of oil and gas.
. . .
A military agreement between Columbia and Washington caused serious concerns in the region when it was announced last year. Besides allowing the occupation of seven military bases in Colombia, the agreement also authorizes Washington to use the entire Colombian territory to conduct military operations. An official document from the U.S. Air Force, May 2009, explained that Washington needed to ensure their presence in Colombia to conduct “broad spectrum” military operations throughout South America, and to “combat the threat … from anti-American governments in the region.” The document also explained that through the military bases in Colombia, the U.S. military “will improve its ability to perform a quick war” in the region.
. . .

Nuclear Brinkmanship Is Back: Putin OKs Using Nukes In Response To Conventional Attacks