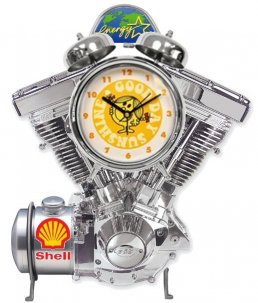 The Environmental Protection Agency certified that a “gas-powered clock radio” was an energy-efficient product under the government’s Energy Star program, despite the fact that neither the clock nor its manufacturer ever existed.

The clock and 14 other phony products were part of an investigation into the Energy Star program conducted by the Government Accountability Office, which submitted 20 fraudulent Energy Star applications from four fake companies.  The EPA evaluated 16 of those products while the Department of Energy (DOE) evaluated four.

Fifteen of the phony products – including the gas-powered alarm clock – and all four of the fake companies were certified by EPA/DOE under the Energy Star program.

One of the phony products, which GAO submitted as an energy-efficient air cleaner, was pictured on a phony Web site as nothing more than a space heater with a feather duster taped to it.

In addition to certifying 15 of the 20 bogus products, EPA/DOE rejected only two and failed to act on three.

One of the products that EPA failed to act on was described by the GAO as an “electric office hammer.” The others were a battery charging system and a decorative lighting string, both of which submitted fake test results. The lighting string cited a nonexistent testing laboratory.

GAO said the fact that it could so easily dupe the government showed that the Energy Star program, designed to inform the public about which products are the most energy efficient, provides scant assurance for consumers.

“Our investigation found that companies can easily submit fictitious energy-efficiency claims in order to obtain Energy Star qualifications for a broad range of consumer products,” the GAO report said. “[T]he current process for becoming an Energy Star partner and certifying specific products as Energy Star compliant provides little assurance that products with the Energy Star label are some of the most efficient on the market.”

Launched in 1992, Energy Star was designed to promote, and help consumers identify, energy-efficient products in over 60 categories by certifying that they meet certain efficiency requirements. Generally, such products are up to 25 percent more efficient than the federal minimum standard, GAO said.

Energy Star is administered jointly by the EPA and the Department of Energy, which provides grants and certifications for some products. GAO said it submitted most of the fake products to the EPA.

Products that meet the government’s standards get access to Energy Star marketing materials, including stickers placed on their products that tell consumers they are energy efficient. However, as GAO discovered, manufacturers are allowed to provide their own proof of energy efficiency, claims that EPA and DOE do not regularly verify.

Nearly all of the phony products submitted by the GAO -- including the air cleaner – were listed as Energy Star products on the Energy Star Web site, energystar.gov.

Most of the fake products, had they been real, would have qualified consumers for federal and/or state tax credits and rebates. Tax credits can range up to $1,500 on products such as home insulation, windows, doors, and furnaces.

As for the gas-powered alarm clock, EPA admitted to GAO that it goofed: “EPA officials confirmed that because the energy efficiency information was plausible, it was likely that no one read the product description information,” the GAO said in its report.

In a joint statement, EPA and DOE said that consumers should have “no doubt” that Energy Star products are actually energy efficient, and the agencies vowed to tighten the “loopholes” the GAO discovered.

“This report highlights a number of issues that must be addressed to ensure no one is exploiting the program and inappropriately receiving Energy Star certification,” the agencies told CNSNews.com in a statement. “We will continue to eliminate loopholes and strengthen this program -- but consumers should have no doubt that products with the Energy Star label will save them money and reduce carbon pollution.”

Greg Kutz, managing director of GAO’s Forensic Audits and Special Investigations division, told CNSNews.com that the phony products ranged from the apparently legitimate to the “ridiculous,” yet the GAO was never questioned about any of the fake products approved by EPA and DOE.

“In a couple of cases we got emails [from the government],” Kutz said. “I don’t think we ever spoke to anybody. In some cases they asked us for additional information, and we simply emailed them a response and they accepted it.”

Kutz said the lack of actual investigation by the federal government is a common occurrence. There is rarely any “human intervention” in evaluating programs, he added.

“Often times there is no human intervention, it’s simply mail or e-mail or something else and there’s no face-to-face or site visits or due diligence. In this case there were clearly no site visits and no phone calls and in most cases – except the two – no real independent third-party validation.”

Kutz said his investigation showed that consumers could not assume that products and companies earning Energy Star certifications have actually been verified by the government.

“The point is that they are assuming that that Energy Star label means someone’s validated the manufacturers’ claims, and I think what we’ve clearly shown here is that that’s not the case in most of these instances.”