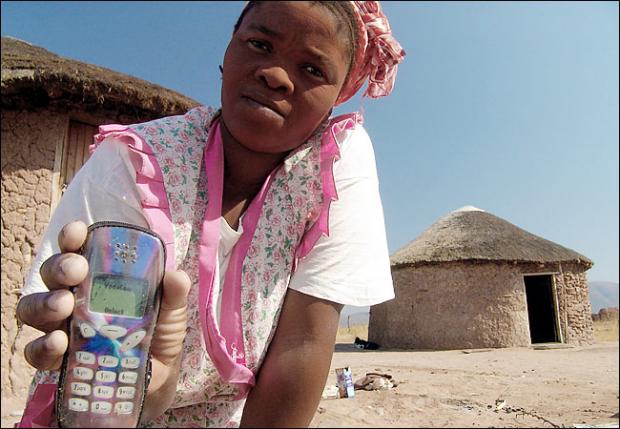 Growing up on a dairy farm in central Kenya, Amos Gichamba says he watched farmers be exploited by the people who bought their cows' milk and sold it to dairy companies.

"The price of milk at the farmer level is very low compared to how much it's sold to consumers. So they end up getting very little money for a lot of work," he said by phone.

The problem, he thought, was one of information. The rural farmers didn't know how much they could charge for their cows' milk. They didn't know what rates dairy farmers other villages were being paid. And without a sense of current market conditions, they weren't sure when to ramp up or slow down production. All of this made them easy targets for scams.

So, with all that in mind, Gichamba, 26, decided to create what he sees as the perfect technological solution for the farmers: a mobile phone app.

He created a text message-based system that lets farmers send questions to a computer. When the app launches at the end of April, a machine will match up farmers' queries with a database of information about local dairy markets -- and then spit answers back in 140 characters or less.

"As Africans, we are the ones who understand Africa the best," he said. "We see situations from the ground. We are involved with what's happening. So, when we are coming up with solutions, we come up with solutions for problems we know."

Gichamba is one of a number of mobile app developers to crop up in Africa in recent years. While developers in the United States rush to make flashy games for Apple's latest gizmo, the iPad, these young developers are trying to tackle Africa's most vexing problems.

Many are doing so with simple text message applications on phones that cost no more than $25.

Text message phone apps now help African people check market prices, transfer money, learn languages and alert authorities to the need for food or other aid in the event of a disaster. And this all comes despite Africa's reputation as the "least wired" continent in the world.

The work of these mobile developers is buoyed in part by the fact that while wired telephone lines and broadband Internet connections are very rare in Africa, cell phone use is exploding.

In Jessica Colaco's view, the ubiquity of mobile phones makes them vehicles for social change.

The 27-year-old mobile developer says that in some ways, Africa is taking the lead in developing apps that can be used in rural places and can improve livelihoods.

"What we need is more evangelism," she said. "People need to know what Africa is doing -- and how they can adopt from us."

Colaco, who is also a researcher at Strathmore University in Nairobi, Kenya, started a "boot camp" program for young people who want to become app developers. So far, she's held two sessions with 100 participants each, she said, and she has plans for more.

The group has inspired competition and yielded tangible results, she said.

One student, for instance, created a text message app that alerts fishermen when fish trigger sensors in a certain area of a local lake, she said. That way, the fishermen will know exactly where and when to put their lines in the water.

"People in the environment know exactly what they need," Colaco told CNN.

Colaco said African technologists should emulate the successes of Western companies like Apple and Google, but they must work on ideas that work specifically in local conditions.

Her first mobile app was a smartphone map of Nairobi. It came out in 2007, before Google had published detailed maps of the area, she said. She lived there, so she knew that a mobile map would be useful -- and that one didn't exist.

Ory Okolloh started the mobile-informed Web site Ushahidi after she traveled to Kenya to vote in the 2007 elections, which turned violent. She posted reports about the violence on her blog, and she asked people to tell their own stories as comments to her posts.

The comment fields filled up so quickly that she thought to create a site where people could share their stories by text message immediately after a crisis. She paired those reports with a map to make the data more useful for crisis responders.

Okolloh emphasized the site is a team effort, with 10 full-time staff members now.

The code that supports the site is available for free and has been used in several disasters since, including the January earthquake in Haiti and the "snowmageddon" storm in Washington, D.C., this February.

"At the heart of apps that have been successful and that will continue to be successful are apps that are practical and allow people to do something that they weren't able to do before -- either with a bank account or to communicate, which is at the heart of Ushahidi ... to allow people to get their story out," she said by phone from Johannesburg, South Africa, where she lives now.

Okolloh said people should be able to develop apps that work all over the world, "whether they're in Alaska or in Timbuktu."

But Africa has a history of "tinkering" -- led by people who learn by necessity to make the most of their limited resources -- that gives the continent's app developers a certain creative, make-it-work determination, she said.

A number of barriers remain for app development and tech deployment in Africa.

Jon Gosier, founder of a Uganda-based company called Appfrica, said some people aren't comfortable getting information through text, or don't know how to send accurate queries to text-based apps. Others simply can't read. His company tested a call-center model, also tried in India, where farmers can call a free hotline to get information about crop disease.

The number of farmers who use cell phone apps is relatively small, he said.

"I think it's being tried a lot and I think there's a lot of use, but it has to be more ingrained just in, like, people's daily workflow than it is," he said.

Developers said smartphones will have to get much cheaper in order for masses of people to purchase them. The mobile Web and wired broadband connections also have to improve in Africa for tech innovation to make the next leap, the developers said.

And the use of text messaging to get information from a database or an entire social network is relatively new for most people, who tend to think of phones only for one-on-one communication, according to Gichamba, the former farmer in Kenya.

Gichamba says the phone, especially when enabled with apps, has the power to change people's lives.

"I believe this is the technology for Africa," he said.