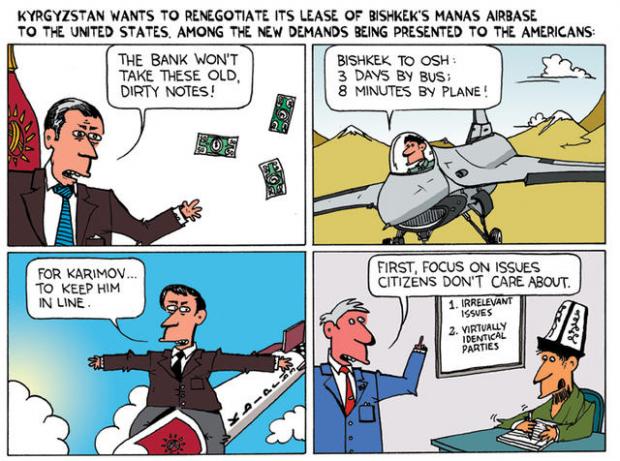 BISHKEK, Kyrgyzstan — Back in 2005, the last time angry crowds toppled the government of Kyrgyzstan, the United States found itself in an awkward position: among the rallying cries was an allegation that the ruling family had benefited handsomely from Pentagon contracts. Now, substantially the same thing appears to be happening again.

Senior leaders in the interim government that took power last week are accusing the United States of allowing family members of the ousted president, Kurmanbek Bakiyev, to enrich themselves with contracts supplying jet fuel to Manas Air Base outside Bishkek, the Kyrgyz capital.

Companies controlled by the president’s 32-year-old son, Maksim, who became a loathed figure during the uprising, skimmed as much as $8 million a month from fuel sales to the base, according to senior leaders in the new government, relying on a monopoly and favorable taxes.
. . .
The officials accuse the United States of having used that system to curry favor with the ousted president in order to hold onto the air base, the only remaining Amerian military refueling site in Central Asia after Uzbekistan closed a base in a dispute with the United States over human rights.
“Whatever the Pentagon’s policy of buying warlords in Afghanistan, the state of Kyrgyzstan demands more respect,” Edil Baisalov, chief of staff of the interim leader, Roza Otunbayeva, said in an interview. “The government of Kyrgyzstan will not be bought and sold. We are above that.”
. . .
Omurbek Tekebayev, the former acting president, said in an interview that the trading companies made money selling cheap Russian jet fuel at world prices to the American base.
. . .
[See followup at House panel probes ex-Kyrgyz leaders' ties to fuel deliveries at Manas air base, from the Washington Post.]