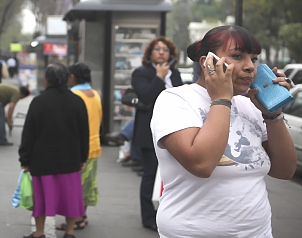 The LA Times Mexico's federal government went ahead over the weekend with a plan to disconnect cellphone lines whose users did not submit their identities to a national registry by midnight Saturday, a move intended to strike a blow to organized crime. About 69% of the 83.5 million cellphone lines in Mexico had been registered, La Jornada reported. But by Sunday, 25.9 million cellphone lines not registered in time were in the process of being cut off.

As with many operations undertaken by the federal bureaucracy in Mexico, organizational disorder increased as the process quickened.

Confusion reigned among many over how to complete the process to register their lines. The registration system, known as RENAUT, was swamped by last-minute users. And one provider, Movistar, threatened to ignore the government's order to disconnect lines, saying telecommunications were a "constitutional right."

Foreigners living in Mexico, meanwhile, were left to figure out their options on their own by sharing information on online message boards.

"The disconnection of 31% of cellular telephone lines in the country represents an unprecedented act ... in the history of telecommunications and in commercial contracts between individual parties," said La Jornada in its Sunday coverage.

Cellphone providers, of course, stood to lose tens of millions of pesos if large numbers of cellphone lines were temporarily disconnected. But the government did not budge. Procrastination, the president of the Federal Communications Commission said gravely on Friday, "carries consequences."

When the deadline finally hit, a stunned disbelief gripped some Mexicans, clutching their hand-held links to the world in homes and businesses over the weekend: How could my cell number just ... be cut off?

To register, users had to provide their CURP number, similar in some uses to a Social Security number in the United States. But many Mexicans said they did not have a CURP or know their number. On some social-media sites, others admitted to unlawfully using someone else's CURP -- in some cases, that of a dead person -- to register. In apparent protest of the registration law, an estimated 12,000 cellphone lines were reportedly submitted to the registry under the name Felipe Calderon, Mexico's president.

Providers have told their customers their lines, including their calling credit, will not disappear while the RENAUT system has them cut off.