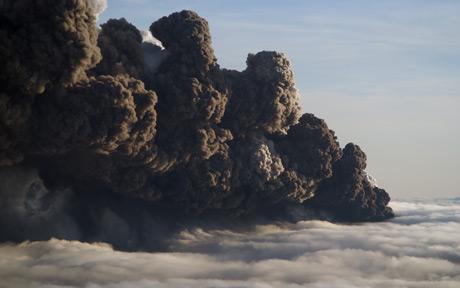 France decided to shut the three airports in the Paris area and others in the north of the country until 8:00 am (0600 GMT) on Monday due to the ash cloud that has caused the biggest airspace shutdown since World War II.

Additionally, British Airways cancelled all its flights due to have arrived in and depart London on Sunday.

Winds blowing the massive cloud eastward from Iceland to Russia will continue in the same direction for at least two days and could go on until the middle of next week, the Icelandic Meteorological Office said on Saturday.

"The ash will continue to be directed towards Britain and Scandinavia," Teitur Arason, a meteorologist at the Icelandic Meteorological Office, told AFP.

"That's the general situation for the coming days ... more or less for the next two days or maybe the next four or five days," he said.

The volcanic ash cloud is heading towards Greece as it moves further south as well as east into Russia, Britain's meteorological group the Met Office said on Saturday.

Poland said it was shutting its airspace "until further notice".