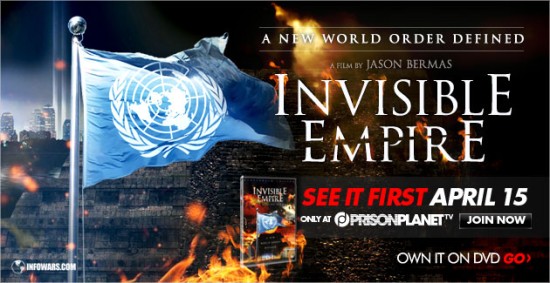 In this 15 minute promo filmed exclusively for Prison Planet.tv members, who will be the first to see the highly anticipated Invisible Empire when it drops on April 15th, Alex Jones and Jason Bermas explain why the release of this new documentary, which the Infowars team have poured 18 months of blood sweat and tears into, represents a call to action for Infowarriors around the globe to use this tool as a means of unlocking millions more minds from the matrix.
Alex explains how the destiny of the impact the film will achieve is solely in the hands of you, the audience, in making the movie go viral in the same way as Loose Change, the Obama Deception and Endgame achieved viral success, and in turn waking up millions more people to the New World Order system and enabling them to take the first steps in resisting their tyranny.
Bermas discusses how the movie contains over 200 quotes alone from top powerbrokers discussing the birth of the new world order and global government, completely demolishing once and for all any doubts that the elite are setting up an authoritarian global dictatorship.

This is a film for the everyman – crafted to slap average Americans out of their slumber and tear them away from the mundane concerns of their football team and their brainwashed default position of thinking their lives are meaningless and they can have no affect on the world around them.
Prison Planet.tv members can watch this exclusive 15 minute Invisible Empire preview by logging in at Prison Planet.tv and hitting the “movies” tab.
Not a member? Subscribe now to get daily Alex Jones Show video and audio archives, exclusive access to the live video stream, along with every Alex Jones documentary and thousands of other pieces of multimedia.
GET THIS POWERFUL FILM ON DVD April 15th AND ONLINE AT PrisonPlanet.tv.

2 Comments in Response to Invisible Empire Special: A Call To Action