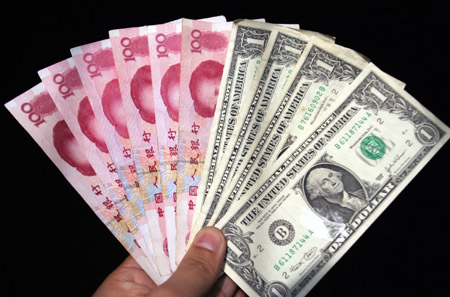 “As a strong, large, independent, growing economy, it doesn’t make sense for that country to run a monetary policy exchange-rate regime that effectively lets the Federal Reserve set interest rates for their economy,” Geithner said at an American Society of News Editors conference in Washington yesterday. “That’s why I think -- why I’m confident that they’re going to move.”
President at a Washington meeting to move to a “more market- oriented” exchange rate. China’s official Xinhua News Agency cited President Hu as saying the country wouldn’t yield to outside “pressure.”
The Obama administration “will be very forceful and aggressive in making sure we are promoting changes” in China, Geithner said yesterday.
U.S. lawmakers say the yuan peg, at about 6.83 to one dollar since July 2008, gives Chinese exporters an unfair advantage, and they have urged the Obama administration to increase pressure on China to change the policy. The U.S. ran a $227 billion trade deficit with China last year.
A Bloomberg News survey of 19 analysts forecasts China may allow the yuan to appreciate by June 30 to help curb inflation.
Separately, New York University economist .”
“It’s not at all a game changer, absolutely, but politically that’s the maximum that China can do,” Roubini, who predicted the global financial crisis, said in New York. The move would “allow at least the U.S. to signal there is some movement and prevent the U.S. from declaring China as a currency manipulator.”