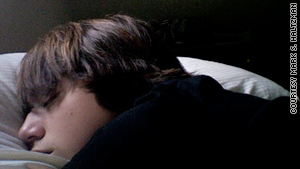 [luckily 99% of the article's comments are against the school]
School administrators at a suburban Philadelphia school district wrongly captured thousands of images of students using school-issued laptop computer cameras, according to a motion filed in a lawsuit involving one of those students.

But school officials in the Lower Merion School District of Montgomery County, Pennsylvania, deny their actions were illegal or inappropriate, although they have admitted that they failed to provide proper notification of their policy to parents and that there were "a substantial number" of photos recovered during their investigation.

All students at the two high schools in the Lower Merion district have access to a laptop computer, which they are allowed to take home upon payment of an insurance fee in case the device is lost or damaged. The school district installed the LANrev webcam security system for use if the laptop is reported lost, missing or stolen.

But Michael and Holly Robbins say the computer their son brought home was not lost or stolen, and their son was photographed more than 400 times, captured in the act of sleeping, text-messaging with friends and -- on one occasion in November -- handling some candies that a school administrator mistook for pills.

An assistant principle called Blake Robbins into her office to confront him about the "pills" -- actually a fruit-flavored chewy candy with a capsule-like shape -- alerting the Robbinses to the webcam use on their son's laptop. They filed suit in February against the school district, its board of directors and the school superintendent.

Attorney Mark Haltzman filed the new court papers Friday after sifting through thousands of documents provided by the school district as part of the case, accusing the district of "spying" on students.

Henry Hockeimer, an attorney for the school district, referred CNN to a letter from board president David Ebby posted on the district's Web site for comment about Haltzman's motion. In the letter, to district parents and guardians, Ebby denied that any "spying" had taken place.

"While we deeply regret the mistakes and misguided actions that have led us to this situation, at this late stage of the investigation, we are not aware of any evidence that District employees used any LANrev webcam photographs or screenshots for such inappropriate purposes," he wrote.

Ebby further said that the school district was "committed to disclosing fully what happened, correcting our mistakes, and making sure that they do not happen again." An investigation conducted by an outside counsel and a computer security expert should be complete "in the next few weeks" and the results would be released.

Haltzman, however, told CNN that he believes students were photographed in violation of the school district's policy that access to the webcams would only be granted if the computer were reported to be lost, stolen or missing. School officials knew, he said, where Blake Robbins' laptop was.

Haltzman said the documents he received detail other times the webcams were used when computers were not reported lost, stolen or missing. But Charles Mandracchia, an attorney representing an administrator involved in the case, said cams were used to locate laptops that had not been returned on time at the end of the year or that should not have been taken home, for example, if the insurance fee was not paid.

Blake Robbins, Mandracchia said, had an unpaid insurance fee, although Haltzman said the Robbinses had arranged a payment plan at the time the photos were taken.

The case has caught congressional attention. Sen. Arlen Specter, D-Pennsylvania, introduced legislation Thursday that would close what he sees as a loophole in federal wiretap laws.

We could start by making all elementary schools to be allowed to require only 3 subjects - reading, 'riting, and 'rithmetic. All other courses would be elective by the parents.

Police Use 'Geofence' To Find Anyone Close To A Crime Scene