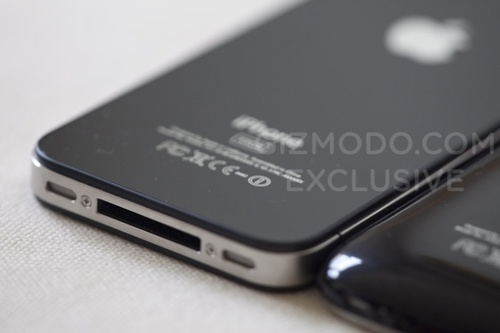 What's changed
• The back is entirely flat, made of either glass (more likely) or ceramic or shiny plastic in order for the cell signal to poke through. Tapping on the back makes a more hollow and higher pitched sound compared to tapping on the glass on the front/screen, but that could just be the orientation of components inside making for a different sound
• An aluminum border going completely around the outside
• Slightly smaller screen than the 3GS (but seemingly higher resolution)
• Everything is more squared off
• 3 grams heavier
• 16% Larger battery
• Internals components are shrunken, miniaturized and reduced to make room for the larger battery

Why we think it's definitely real
We're as skeptical—if not more—than all of you. We get false tips all the time. But after playing with it for about a week—the overall quality feels exactly like a finished final Apple phone—and disassembling this unit, there is so much evidence stacked in its favor, that there's very little possibility that it's a fake. In fact, the possibility is almost none. Imagine someone having to use Apple components to design a functioning phone, from scratch, and then disseminating it to people around the world. Pretty much impossible. Here are the reasons, one by one.
It has been reported lost
Apple-connected John Gruber—from Daring Fireball—says that Apple has indeed lost a prototype iPhone and they want it back:

So I called around, and I now believe this is an actual unit from Apple — a unit Apple is very interested in getting back.

Obviously someone found it, and here it is.
The screen
While we couldn't get it past the connect to iTunes screen for the reasons listed earlier, the USB cable on that screen was so high quality that it was impossible to discern individual pixels. We can't tell you the exact resolution of this next-generation iPhone, but it's much higher than the current iPhone 3GS.
The operating system
According to the person who found it, this iPhone was running iPhone OS 4.0 before the iPhone 4.0 announcement. The person was able to play with it and see the iPhone 4.0 features. Then, Apple remotely killed the phone before we got access to it. We were unable to restore because each firmware is device specific—3GS firmware only loads on 3GS devices—and the there are no firmwares available for this unreleased phone. Which is another clue to its authenticity.