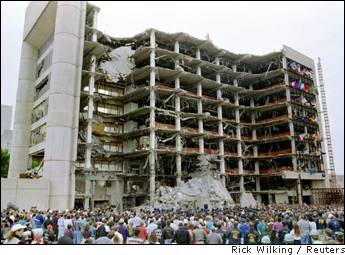 1 Comments in Response to I Just Wanted to Remind Everyone that Terrorists Shop at Wal-Mart!

The Crime Control Act of 1993 would have approved "illegal searches." Searches, wiretaps and seizures" that would result in obtaining evidence from an invalid warrant issued by a detached and neutral magistrate and found to be invalid based on misleading information or reckless disregard of the truth could "override Constitutional 4th Amendment protections against illegal search and seizure." The Crime Control Act of 1993 would have allowed government to use against its citizens illegally seized evidence.” Bush II included this provision in the first draft of the 2001 Patriot Act. It was not included in the final draft.

Currently: On March 4, 2010, Sen. John McCain introduced S.3081, The “Enemy Belligerent Interrogation, Detention, and Prosecution Act of 2010” possibly the most anti-Free Speech Bill in Modern U.S. History. McCain’s S.3081 if passed, would eliminate several Constitutional protections allowing Government to arbitrarily pick up Americans on mere suspicion—with no probable cause. Your political opinions and statements made against U.S. Government could be used by Authorities to deem you a “hostile” “Enemy Belligerent” to cause your arrest and indefinite detention. S.3081 is so broadly written innocent anti-war protesters and Tea Party Groups might be arrested and detained just for attending demonstrations; Government can charge that attending demonstrations "materially supported hostilities."

Under S.3081, an “individual” need only be Suspected by Government of “suspicious activity” or “supporting hostilities” to be dragged off and held indefinitely in Military Custody. Government will have the power to detain and interrogate any individual without probable cause. Government need only allege an individual kept in detention, is an Unprivileged Enemy Belligerent suspected of; having engaged in hostilities against the United States or its coalition partners; or has purposefully and materially supported hostilities against the United States; its coalition partners; or U.S. civilians. How could one prove to Government they did not purposely do something? “Materially Supporting Hostilities” against the United States could include any person or group that spoke out or demonstrated disapproval against an agency of U.S. Government. It is foreseeable many Americans might go underground to Resist Government Tyranny. Definition for Unprivileged Enemy Belligerent: (Anyone Subject to a Military Commission)

At least under the Patriot Act, law enforcement generally needed probable cause to detain a person indefinitely. Passage of S.3081 will permit government to use “mere suspicion” to curtail an individual’s Constitutional Protections against unlawful arrest, detention and interrogation without benefit of legal counsel and trial. According to S.3081 Government is not required to provide detained individuals U.S. Miranda Warnings or even an attorney.

Yes, There IS a Domestic Threat in America. It's Our Own Government

Doug Casey on the (Domestic) War on Terror 2.0

Pressure on Biden to Remove Cuba From Terror List

THIS IS TOLERANCE? Christian crisis pregnancy center in Colorado vandalized, set on fire over...