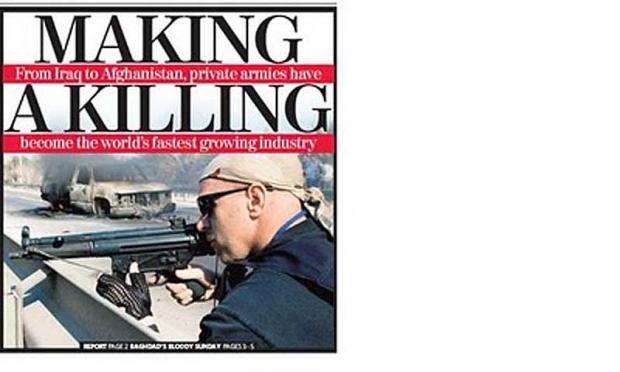 It is often true, as supporters of private military contractors contend, that media coverage of their activities is unfair, inaccurate, or biased. Doug Brooks, founder and head of IPOA, a major pro-contractor trade association has been saying that since its founding in 2001

But that does not mean they are above criticism. In fact, it can be said that some times that they do not get the criticism they deserve.

For example consider the story published March 20 by Pro Publica and Newsweek regarding the training of the Afghan National Police.

Perhaps the public is jaded by all the stories about problems with private military and security contractors over the years but this story was not the run of the mill story about fraud or an unjustified killing. This dealt with actions that had strategic consequences.

America has spent more than $6 billion since 2002 in an effort to create an effective Afghan police force, buying weapons, building police academies, and hiring defense contractors to train the recruits--but the program has been a disaster. More than $322 million worth of invoices for police training were approved even though the funds were poorly accounted for, according to a government audit, and fewer than 12 percent of the country's police units are capable of operating on their own.

The contractor that was hired in 2003 by the U.S. State Department to do the police training was DynCorp International, which had held previous contracts to train police officers in Kosovo and Haiti. DynCorp, still holds the contract . It is an extension of a contract which has expired and that extension runs until July of this year.

One of the astonishing allegations in the article was this:

At Kabul's police training center, a team of 35 Italian carabinieri recently arrived to supplement DynCorp's efforts. Before the Italians showed up at the end of January for a one-year tour, the recruits were posting miserable scores on the firing range. But the Italians soon discovered that poor marksmanship wasn't the only reason: the sights of the AK-47 and M-16 rifles the recruits were using were badly out of line. "We zeroed all their weapons," says Lt. Rolando Tommasini. "It's a very important thing, but no one had done this in the past. I don't know why."

Now, for those who are going to be handling a rifle, learning to zero the sights or the scope is, to borrow from Sherlock Holmes, elementary. . .