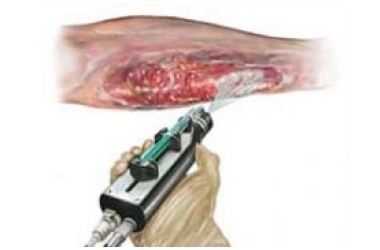 PITTSBURGH, Pennsylvania — First stop: the spray gun that shoots out skin cells. Next, the blind man who “sees” by using his tongue. Finally, a shake of a marine’s transplanted hand.
The nation’s top military officer today took a look at some of the Pentagon’s wildest medical research projects. But once the seemingly-sci-fi demonstrations at the University of Pittsburgh Medical Center were over, Joint Chiefs of Staff Chairman Admiral Mike Mullen voiced some concerns. The technologies and techniques seemed promising. But when would they be available, really, to help wounded veterans? And why did the corporal with the replacement hand have to rely on his girlfriend’s mom to find out about his revolutionary treatment?
In 2008, the Department of Defense and academia set aside $250 million to set up a consortium to fund bleeding-edge research into the science of rebuilding human muscle, tissue, and minds. Today, that Armed Forces Institute of Regenerative Medicine (AFIRM) project is beginning to show results. Whether those results will come in time for the tens of thousands of wounded veterans returning from Afghanistan and Iraq remains an open question.
“That’s the challenge you always have with research: How do you get research to full production levels,” Mullen said. “I’m satisfied we can. I’m not satisfied we’re doing it rapidly enough. And one of the things I take away from this trip is to go back and see if I can push from where I am to roll this out more rapidly.”
One of the researchers here, Dr. Douglas Kondziolka, mentioned it might be another decade before his treatment of transplanted brain cells might be wildly available to troops who have suffered in war. The research was proceeding methodically. And approval for large-scale tests on human brains takes forever to obtain. Mullen seemed less than enthused. ‘”10 years doesn’t satisfy any of us,” he later said.