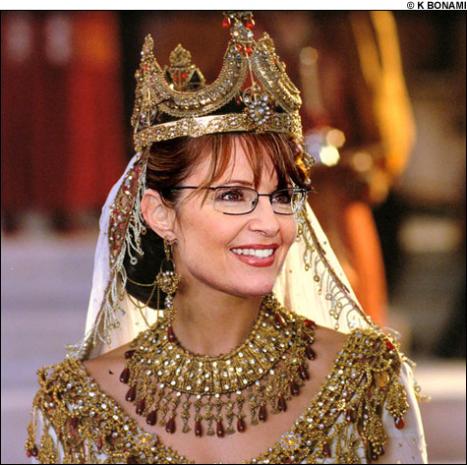 Last Thursday, ABC News published a story titled "SarahPAC Ensures That Sarah Palin Travels in Style". A subheader added, "When She Speaks for Fees, Her Hosts Pick Up Tab; When Talking at Political Rallies, Donors Pay."
Matthew Mosk reported that "Palin spent more than $400,000 from her political action committee during the first three months of 2010, using the money donated by supporters to pay her team of advisers and cover the costs of stays in luxury hotels, flights, and even to de-ice a private jet that was shuttling her to a campaign rally."

The payments from her "leadership" PAC, called SarahPAC, are detailed in a newly released filing with the Federal Election Commission, and they lend additional insights into how the former GOP vice presidential nominee is paying for her whirl of post-governorship activities.
Much of the SarahPAC money contributed by her donors is being spent on legal and political advice. She has several consultants who help with media inquiries, and pays a former foreign policy adviser to Sen. John McCain to keep her fresh on global issues. A good portion is also going to the high-end hotels and first class travel that has become a staple of her life in the months since she left office.

At Politics Daily, Sandra Fish takes a closer look at the money that went entirely to consultants.

Sarah Palin put the bull's-eye on 20 U.S. House races on her Facebook page last month, but didn't donate to favored candidates in those districts during the first quarter of the year.
Although her SarahPAC took in $400,000 in the first quarter and had more than $900,000 in the bank, it gave only $7,500 to candidates between January and the end of March, plus an additional $2,000 to two other PACs. None went to Republicans in the races she targeted.

However, since Palin didn't target the races until March 23rd, those monies might not show up until the next SarahPAC filing.
But Fish's column notes, "Almost $243,000 went to consultants, including almost $45,000 to PAC treasurer Timothy Crawford (some of it for expenses), plus $21,500 for legal services. NorthStar Strategies took in $50,000, and Orion Strategies $30,000. Consulting services included media strategy, fundraising, candidate research and grassroots coalitions."
At the official site for Palin's political action committee, SarahPAC states that it's "[d]edicated to building America's future, supporting fresh ideas and candidates who share our vision for reform and innovation," and the donation page asks supporters to "[p]lease send what you can to SarahPAC today and help the campaigns of good, strong, commonsense Americans who will clean up the mess that Washington has created."
Conservatives upset about paying too much money in government taxes might not be pleased that over sixty percent of the total donations SarahPAC received during the first quarter of 2010 went to consultants instead of candidates or their campaigns.
ABC News reported last week, "Tim Crawford, a spokesman for Sarah PAC, said he sees nothing out of the ordinary in the way Palin has made use of her account. As for the $7,321 de-icing expense? Crawford said as Palin prepared to depart by private jet from Dulles Airport in Washington, 'there was thick stuff on the wings.' They thought it wise to have it removed. "