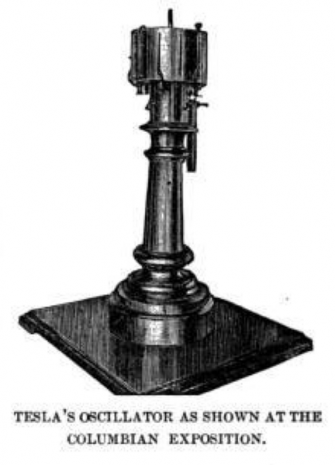 He constructed a simple device consisting of a piston suspended in a cylinder, which bypassed the necessity of a camshaft driven by a rotating power source, such as a gasoline or steam engine. In this way, he hoped to overcome loss of power through friction produced by the old system.
This small device also enabled Tesla to try out his experiments in resonance. Every substance has a resonant frequency which is demonstrated by the principle of sympathetic vibration the most obvious example is the wine glass shattered by an opera singer (or a tape recording for you couch potatoes.) If this frequency is matched and amplified, any material may be literally shaken to pieces.
A vibrating assembly with an adjustable frequency was finally perfected, and by 1897, Tesla was causing trouble with it in and near the neighborhood around his loft laboratory. Reporter A.L. Besnson wrote about this device in late 1911 or early 1912 for the Hearst tabloid The World Today. After fastening the resonator ("no larger than an alarm clock") to a steel bar (or "link") two feet long and two inches thick:   He set the vibrator in "tune" with the link.
For a long time nothing happened, vibrations of machine and link did not seem to coincide, but at last they did and the great steel began to tremble, increased its trembling until it dialated and contracted like a beating heart&endashand finally broke. Sledge hammers could not have done it; crowbars could not have done it, but a fusillade of taps, no one of which would have harmed a baby, did it. Tesla was pleased.
But not pleased enough it seems: ....

The Unspoken Strife of Conspiracy Realists: You Are Not Alone

Bill Gates Wants "conspiracy theories" About Him To Go Away

THE TRUTH About Mass Shootings in America - Season 1, Ch.1: Time to Wake Up

'This is a Full-Blown Political Purge':

My Prediction on the CIA's Secret Assassination Files

Superabundance: The Age of Plenty | Marian Tupy and Gale Pooley | #284

Another US Food Processing Plant Catches Fire, Add This To Growing List

Another Massive US Factory Torched In The Middle Of The Night!

Fraudci Flees As The System Panics That It Is Being Exposed...