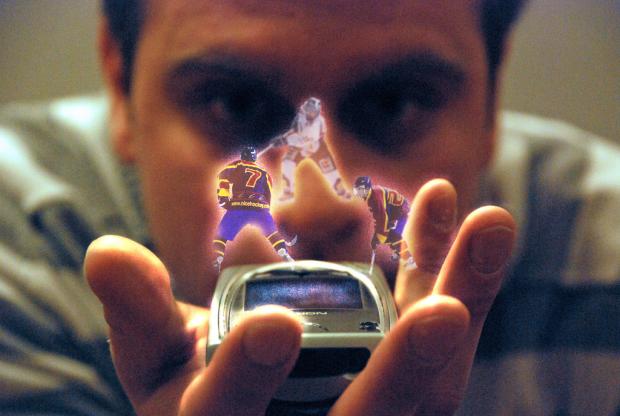 3-D on the go: Released in South Korea in March, Samsung's W960 mobile phone comes with 3-D video content, generated by Dynamic Digital Depth, that can be viewed without special glasses. Dynamic Digital Depth expects that its software to convert 2-D games to 3-D on the fly will be built into phones within the next two years.  Credit: Bryan Christie Design

The Samsung B710 phone looks like a typical smart phone, but something unexpected happens when the screen is moved from a vertical to a horizontal orientation: the image jumps from 2-D to 3-D. The technology that produces this perception of depth is the work of Julien Flack, CTO of Dynamic Digital Depth, who has spent more than a decade perfecting software that can convert 2-D content to 3-D in real time. It could help solve the biggest problem with 3-D: the need for special glasses that deliver a separate image to each eye.

Flack's software synthesizes 3-D scenes from existing 2-D video by estimating the depth of objects using various cues; a band of sky at the top of a frame probably belongs in the far background, for example. It then creates pairs of slightly different images that the viewer's brain combines to produce the sensation of depth.

The technology can be used with the much-hyped 3-D televisions announced in January (which require glasses), but its biggest impact will be as a way to create content for mobile devices with auto­stereoscopic 3-D displays, which work by directing light to deliver different versions of an image directly to each of a viewer's eyes. The effect works best over a narrow range of viewing angles, so it is ill suited to television or cinema screens. But phones are generally used by one person at a time and are easily held at the optimum angle. That's why mobile multimedia devices are likely to win the race to bring 3-D into the mainstream.

Powered by Flack's software, Dynamic Digital Depth has become an early leader in mobile 3-D. The software was built into the B710, which Samsung released in South Korea in 2007, and Samsung has licensed 3-D content generated by Dynamic Digital Depth for its latest 3-D phone, the W960, released in March. Research firm DisplaySearch recently predicted that by 2018 there will be 71 million such devices worldwide.