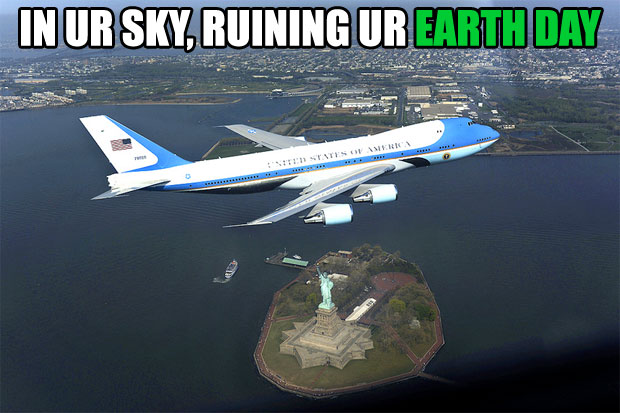 On a day when many Americans will be reflecting upon how they can reduce their impact on the environment, President Barack Obama and Vice President Joe Biden will board separate jets in Washington on Earth Day morning to fly 250 miles up the east coast to New York, where they will land at separate airports to attend separate events within a few miles of each other.

The parallel visits of Air Force One (a 747/VC-25 aircraft) and Air Force Two (a 757/C-32A aircraft) will delay dozens, if not hundreds of commercial flights at Kennedy and LaGuardia and other nearby airports as no-fly zones are implemented. Jets will be forced to circle and burn more fuel as they wait for the VIPs to come and go. Their security contingents consisting of dozens of cars, SUVs and helicopters will burn even more. Throw in thousands of commuters’ cars and delivery trucks sitting idle in traffic as law enforcement closes large swaths of the city and you have yourself a very Earth-unfriendly day.UPDATE: Nevermind, we’re too busy partying with Christine Todd Whitman to worry about the traffic.
Disclaimer: This is a non-partisan post which I would be writing no matter who were in office. I’ve been known to complain when ANY president makes frivolous trips to New York, simply because it disrupts so many people and it is extraordinarily expensive. For both men to visit on the same day, especially a day of supposed environmental friendliness, is extraordinarily thoughtless, to put it mildly.

Thursday’s dual jaunt seems especially egregious considering the frivolous nature of Biden’s visit, in particular: He’ll be yukking it up with Whoopi and Barbara as a guest on The View. Not sure what he’ll be talking about, but you can be certain that whatever he has to say could be done just as effectively using a video camera and satellite hookup from the White House.

Meanwhile, Obama will be making a speech about new banking and finance regulations, a worthy subject, to be sure. Federal Hall on Wall Street, the site of George Washington’s first inauguration which stares directly at the doors of the New York Stock Exchange, would be the ideal location for this speech, but Obama will deliver it from…an art and engineering school? Any symbolism of delivering the speech in NYC is lost. He may as well save everyone the effort and talk to the nation from the Oval Office.

And by no means am I suggesting Obama and Biden should fly on the same plane. We learned all too painfully in Russia this month about why that is a bad idea.

Area planespotters will see the only benefit of this massive disruption, as they will get to see two of the most beautiful aircraft in the Air Force fleet. Judging by the flight restrictions published by the FAA, Obama will be arriving at JFK around 10am, and Biden will touch down at LaGuardia around 9am.

They will both depart by late afternoon, leaving many a frustrated traveler and commuter in their wake.