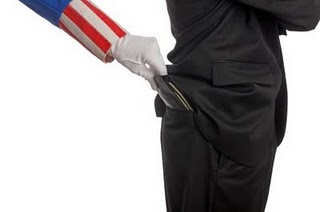 But the messaging guru appears to have a little-noticed ulterior motive – corporate clientele invested in scuttling the bill.

Luntz is founder, president and CEO of consulting firm Luntz, Maslansky Strategic Research, which boasts on its Web site of representing Wall Street clients such as Bank of America, Wachovia, Chase Card Services and UBS. The firms are among those lobbying to scuttle or water down Senate Democrats' financial reform package, which aims to regulate derivatives, complex financial products which are a key profit driver for large financial firms and played a role in the Wall Street meltdown of 2008.

While the striking similarities between Luntz's advice and the ensuing GOP plan of attack have been widely documented – and directly called out by the White House – numerous Republicans deny he was the originator of their "bailout" talking point, in Politico’s lead story Thursday.

"After hearing Republicans uniformly parroting Luntz talking points meant to falsely smear the bill verbatim before they had even read it, you don’t need a pollster to figure out how many people believe this story -- zero," DNC press secretary Hari Sevugan emailed Raw Story on Thursday, dismissing Republicans' claims that Luntz wasn't the source of their anti-reform message.

"If you buy this," added DNC communications director Brad Woodhouse, "I got some ocean front property to sell you in Arizona."

Luntz wrote in his 17-page document in January, "Frankly, the single best way to kill any legislation is to link it to the Big Bank Bailout." Senate Minority Leader Mitch McConnell (R-KY) and GOP colleagues have often claimed in recent weeks that the bill "institutionalizes...taxpayer-funded bailouts of Wall Street banks."

The claim has been debunked by PolitiFact as "false" and rejected by the New York Times, which reports that "[t]he bill would stop taxpayer-financed bailouts."

The legislation – approved by the House in December and currently debated in the Senate, includes stricter regulations on financial institutions – includes a Consumer Financial Protection Agency to curb predatory lending, restrictions on complex derivatives, and clauses that permit the Federal Deposit Insurance Commission to seize and restructure failing banks.

Luntz is tacitly taking credit for the GOP talking point. He told Politico that "there was no language to stop these permanent bailouts, so I wrote it," and adding, "These Republicans who spoke out are just doing their job."

The corporate strategist has previously written memos on how to scuttle health care and energy reforms, urging Republicans to label the former a "government takeover" of the system and, on the latter, to emphasize the ostensible inconclusiveness of climate science.