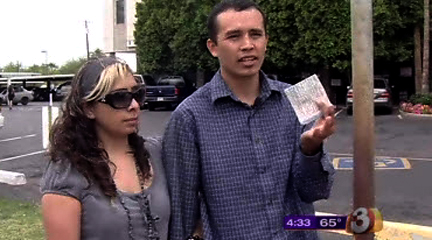 PHOENIX – A Valley man says he was pulled over Wednesday morning and questioned when he arrived at a weigh station for his commercial vehicle along Val Vista and the 202 freeway.


Abdon, who did not want to use his last name, says he provided several key pieces of information but what he provided apparently was not what was needed.

He tells 3TV, “I don't think it's correct, if I have to take my birth certificate with me all the time.”

3TV caught up with Abdon after he was released from the Immigration and Customs Enforcement office in central Phoenix. He and his wife, Jackie, are still upset about what happened to him.

Jackie tells 3TV, “It's still something awful to be targeted. I can't even imagine what he felt, people watching like he was some type of criminal.”

Abdon was told he did not have enough paperwork on him when he pulled into a weigh station to have his commercial truck checked. He provided his commercial driver’s license and a social security number but ended up handcuffed.

An agent called his wife and she had to leave work to drive home and grab other documents like his birth certificate.

Jackie explains, “I have his social security card as well and mine. He's legit. It's the first time it's ever happened.”

Both were born in the United States and say they are now both infuriated that keeping important documents safely at home is no longer an option.

Jackie says, “It doesn't feel like it's a good way of life, to live with fear, even though we are okay, we are legal…still have to carry documents around.”

A representative at U.S. Immigration and Customs Enforcement (ICE) returned 3TV’s calls after researching the incident and she said this was standard operating procedure.

The agents needed to verify Abdon was in the country legally and it is not uncommon to ask for someone's birth certificate.  She also said this has nothing to do with the proposed bill or racial profiling.

All this dumb-ass had to do is tell whoever asked that he was an American citizen, and if they asked if he could prove it he should have responded with, "Yes I can, but I don't have to.  YOU must prove I am not."  And the longer they hold him the higher the law suit.

Also, another great reporting job by Phoenix NitWitNews - After all the hand wringing and tearjerking we still don't know WHO requested his papers and WHO took him into custody, and under WHAT AUTHORITY.   (There is more than one law enforcement agency in Arizona)

What's worse is the guy is gonna get due-diligenced by half the civil rights outfits in the nation. Could be the first legal challenge in the making. If he makes it through vetting he'll turn out to be a celebrity.

Sure didn't take long to get that ball in motion.