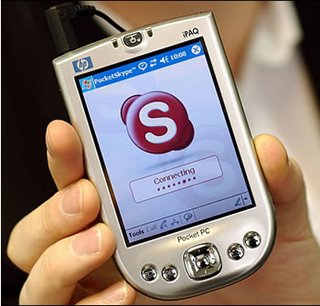 The battle to deliver your wireless phone calls once seemed to have all the makings of an epic showdown between cellphone carriers and mobile voice-over-IP upstarts like Skype.

Instead, the war has evolved into a surprising truce, as fring, Skype, Vonage and a chorus of “me too” voice-over-IP (VoIP) providers already let people call each other over Wi-Fi or the carrier’s wireless data connection on all the major smartphone platforms.

The carriers’ old thinking was: “Mobile VOIP could threaten our voice business.”

Their new thinking: “Who cares when there’s so much money to be made on data?”

“For quite some time, a ton of companies were doing mobile voice and other types of VoIP, and people called it ‘minute stealing’ — it was a race to the bottom, and it was about bypassing, not paying,” William Stofega, director of IDC’s mobile device technology and trends program, told Wired.com. Cellphone companies even sent letters to subscribers telling them their accounts would be terminated, he added, if they continued using mobile VoIP.

“There’s been a rejuvenation in mobile VoIP, as carriers have opened up and decided not to fight it so much … [because] at some point in time, a lot of their revenue is going to be generated by data,” said Stofega. “It’s just a 180-degree turn.”

With the floodgates (mostly) open, InStat sees 288 million mobile VoIP users by 2013, while Morgan Stanley expects mobile-VoIP traffic to more than double every year until at least 2014.

The average cellphone is used only 30 percent for data, but iPhones boost that to 55 percent. And smartphone sales increased 43 percent last year, even as general GSM-phone adoption flattened. Morgan Stanley analyst Mary Meeker said in Japan, where wireless networks have evolved further, in part due to a smaller geographic footprint, cellphone usage is now 90 percent data, and soon its wireless data connections will overtake home and office internet connections in terms of volume.

Mobile data is where it’s at in Japan, and that will increasingly be the case here too, as smartphone adoption continues to rise and new tablets and netbooks hit the market.

Cellphone providers don’t mind voice becoming just another app on our phones, whether delivered over Wi-Fi, Vo3G or cellular voice network — even though that may appear to threaten their voice businesses — for five reasons.