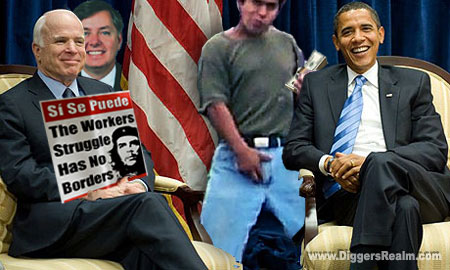 President Obama on Friday said Arizona's proposed law making it a state offense to be an illegal immigrant represents "irresponsibility," and said he's directed his administration to examine the law and see if it violates civil rights.

The president, speaking at a ceremony to naturalize two dozen immigrant U.S. troops, said the fact that Arizona is acting on its own is evidence that Congress need to pass a broad bill legalizing illegal immigrants at the national level.

"Our failure to act responsibly at the federal level will only open the door to irresponsibility by others, and that includes, for example, the recent efforts in Arizona which threaten to undermine basic notions of fairness that we cherish as Americans, as well as the trust between police and our communities that is so crucial to keeping us safe," he said.

Mr. Obama, who this week make phone calls to five Republicans seeking to recruit them to join in writing a bill, on Friday called out "11 current Republican senators" who voted in the past for an immigration legalization bill, and said he is hopeful they will support the effort again.

The Arizona proposal, which has passed the legislature and is awaiting a decision by Gov. Jan Brewer on whether to sign it, would give police the power to check legal status of those they believe to be in the country illegally, and would make knowingly aiding or transporting an illegal immigrant a state crime. Critics say it will encourage profiling, but supporters say it's a law-and-order step. Ms. Brewer has until Saturday to decide whether to sign the measure, veto it or allow it to become law without her signature.

Immigration has shot to the top of the legislative agenda in the past several weeks as Senate Majority Leader Harry Reid, Nevada Democrat, has said he will make time on the Senate schedule for it this year. And House Speaker Nancy Pelosi, California Democrat, said if the Senate passes a bill the House will also take it up, and she said they will have the support to pass it.

In the past Republicans and Democrats have worked together on the issue, but this year the cooperation has dried up.

Sen. Lindsey Graham, South Carolina Republican, has been working with Sen. Charles E. Schumer, New York Democrat, on a bill -- but no other Republican has joined the effort, despite outreach from Mr. Schumer.

Several Republicans who led past efforts -- including Sens. John McCain and Jon Kyl of Arizona, who led the 2006 and 2007 bills respectively, have said there is no consensus this year, and argue that the borders are not yet secure enough to contemplate a legalization.

> Obama hints that amnesty for aliens may be a focus of his soon....

If this be true then we had best stand aside because McCain will be dead-heading for the White House, to lend his help and experience.

California: Foster Parents Asked to Take In '26 or More' Minors as Unaccompanied...

It Begins: Migrants To Be Flown To "Red States" "Near The Canadian Border"

Why There Is No Crisis at the Border! - Special Liberal Report