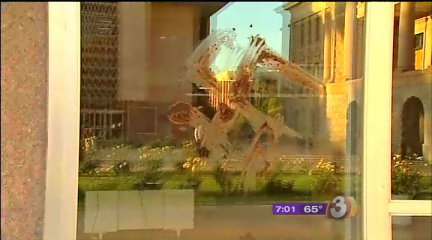 PHOENIX -- Investigators are looking into a case of vandalism at the state Capitol, sparked by the newly signed anti-illegal-immigration law.

Capitol police arrived on the scene at about 6 a.m., after a swastika was found smeared on the glass doors of the House and Senate buildings.

While it first looked like mud on the doors, it turned out be refried beans.

On the sidewalk, beans were used to write "AZ=Nazi," again with a swastika.

It's not clear when exactly the vandalism happened, but police believe it was some time overnight.

"That is what happens when there is so much fear and there is so much disappointment," said Gustavo Ramirez, a protester from California. "The laws that have been passed, they are Nazi laws. They are not considering humanity. They are a crime against humanity."

Ramirez said while he does not support the new law, vandalism is not the way to make a statement.

This is the first case of hate-crime vandalism since Gov. Jan Brewer signed the controversial Senate Bill 1070 into law on Friday.

While there have been protests and rallies by people on both sides of the issue, they have been peaceful.

Protesters are still at the Capitol, vowing to stay and peacefully make their voices heard. The new law will go into effect this summer.

Those opposed to the measure say it essentially legalizes racial profiling.

Supporters say that's not the case. Law-enforcement representatives and the governor insist that racial profiling will not be tolerated.

While protests have been nearly constant since Friday's signing, polls taken before that indicated a majority of Arizonans -- 70 percent -- were in favor of SB 1070.

You know I think they should leave it up there. I'm glad it was at least photographed because what we have here, I think, is "installation art".

I mean, call it "vandalism" if you will but how refried beans are going to damage the edifice is beyond me. It's art. Modern art. And like most modern art, it confuses the shibbit out of me.

A swastika made out of refied beans? If this is political, then what's the message? Is this a message from the Mexican nazis? They were out of sray paint so they used lunch? Is this a statement from white supremacists who were similarly out of spray paint and therefore used lunch (we all eat Mexican food here)? Is this saying Mexicans are Nazis or their white opposition are Nazis? Or is the statement more about refried beans themselves? Like refried beans are inherantly fascist? There's an anti-pinto bean faction out there? The black-bean cartel is making it's move?

No, it makes absolutely no sense to me politically. It has to be art. It's a statement of some sort about our feelings or the existential something or other or it expresses....how refried beans FEEL about fascism or something. Or maybe cause is to reflect, as we eat our burritos and beans and rice like any other house of any colour in Arizona, "am I a fascist?"

I have to admit, it captures a certain thought I've been having for about a year now. Notice that everybody is somebody's Nazi these days? Everybody is somebody's Nazi these days. I can't think of a better visual description of this than a swastika drawn in refried beans. And I think it's pretty damn funny because it's the kind of thing that just makes us stop and wonder and realize maybe somebody out there is pulling our leg and laughing at us from a remote location and saying "you big dummies".

NEWS UPDATE - The World is Burning!