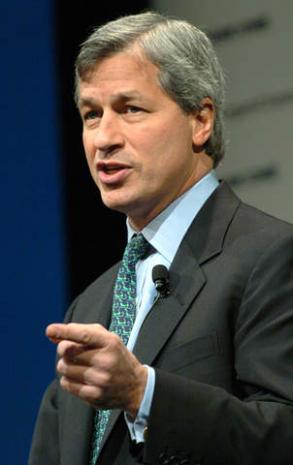 Mariel Fiedler will attend commencement. She will wear her cap and gown. She will walk across the stage. She will revel in the fact that four years of hard work has paid off.

And when JPMorgan Chase & Co. Chief Executive Officer Jamie Dimon gets on stage to give his commencement address, she won’t say a word in protest. Instead, she’ll protest his presence in a silent way — by taking off her robe.

“I’ll sit there and listen to him, but I won’t be wearing my robe when that happens,” Fiedler said.

Fiedler is one of the students leading the Take Back Commencement movement, which has protested the choice of Dimon as the 2010 Syracuse University and State University of New York College of Environmental Science and Forestry commencement speaker. The students originally wanted the university to remove Dimon and choose another speaker. Realizing that wouldn’t happen, they decided the best way to protest Dimon was by taking off their robes during his speech.

The main grievances against Dimon include the process by which he was chosen, dissatisfaction with the banking industry he represents throughout the financial crisis and what some students see as the corporatization of the university.

Dimon would be a great choice for a guest speaker during the academic year, Fiedler said, but the commencement speaker is supposed to bring something special. A commencement address is in a different context than a regular lecture because that speaker is ushering the graduates into the world and inspiring them for the future, she said. By taking off their robes, the students are showing their dissatisfaction with Dimon being the one to usher them into the world, she said.

“We don’t want anything to do with that part,” said Ashley Owen, another student leading the movement.

The students held their largest demonstration against Dimon with a Take Back Commencement rally on the steps of Hendricks Chapel on April 16. Since then, they attempted to get Simon Johnson, the former chief economist of the International Monetary Fund, to give an alternate speech on campus in the days leading up to commencement. They have also been working with the administration to reform the process by which the commencement speaker is chosen.

Despite student protests, Dimon said in a conference call with reporters April 14 that he still plans to deliver the commencement address. Dimon contacted Fiedler to discuss the student discontent with him as commencement speaker, Fiedler said.

“He said to me, ‘I hope you don’t disagree with my right to speak,’ and I just said, ‘I support 100 percent that you have a First Amendment right to speak, but that’s not the issue here. But there is something essentially different about giving a speech at commencement,’” Feidler said.

“I feel like the university would have wanted (Johnson) to speak not on graduation day because that would have detracted from Dimon and made them look bad,” Owen said.

Johnson was the students’ choice as an alternate speaker because he could offer an alternate perspective on why the financial crisis happened, Fiedler said. Johnson also authored a book entitled “Jamie Dimon Is the Most Dangerous Man in America.”

In addition to attempting to bring an alternate speaker, the students have also been working with Senior Vice President and Dean of Student Affairs Thomas Wolfe to reform the process by which the speaker is chosen. Owen said they have offered a variety of changes but seem to be facing many dead ends with the administration.

Their idea was for senior class marshals to continue generating a list of choices. But under the reforms, that list would then be placed on MySlice for every member of the senior class to pick their top two choices. From there, the administration would go right down the list and find the most plausible speaker closest to the top, Owen said.

“It just gives students more of a sense of control of their college career and their own graduation day,” she said. “The top five people maybe wouldn’t be available, but it would still be a step in the right direction to having a more participatory kind of system.”

Wolfe told the students he couldn’t promise any changes, Fiedler said. He said he would look into forming a faculty committee in the fall to revise the process, she said.

“The administration has been very unresponsive to our pleas to change the process,” said Audra Coloumbe, another senior involved in the protests. “I think what Jamie Dimon represents is a corrupt Wall Street, but he also represents a college administration that really might be out of touch with the feelings of the students, and we’re trying to put them back in touch. They’ve listened, but they haven’t really done much.”

But from now until May 16, what the students are really focused on is getting the word out about their plan to de-robe during Dimon’s speech. To them, it’s a quiet yet powerful way to show their discontent.

Of their chosen action, Coloumbe said, “I just want people to realize we’re not disrespectful, but we’re fighting for what we believe in. How else would they expect us to do it?”