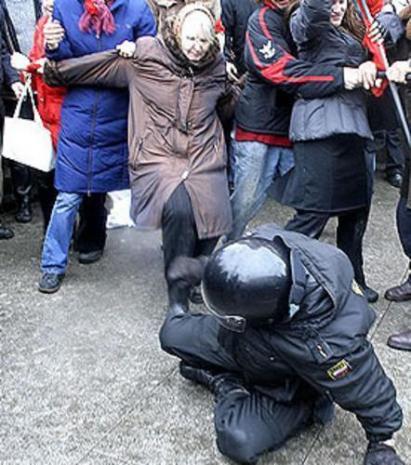 Nazie fascism at it's finest and it's still business as usual.

It is extremely difficult to teach someone the truth when their pay checks depend on them not knowing the truth.

How Dependent Are Local Governments On “Forfeiture” To Pay Their Salaries?

As the economy worsens, it is problematic police departments and local governments with budget short falls, will increasingly look to asset forfeiture of Citizens’ property to pay police officer salaries and their operating costs.

There are over 200 U.S. laws and violations that can subject property to civil asset forfeiture. For example a misrepresentation on a federally insured mortgage loan application can cause Civil Forfeiture of your home. No conviction is required: only "a preponderance of civil evidence" Not “clear and convincing evidence. Police in states that require conviction before property can be forfeited, get around this, by bringing federal police into an investigation to ensure a civil asset forfeiture can be prosecuted under federal jurisdiction requiring no conviction; this is called “adoption.” The Feds then share the forfeited assets with state/local police and their governments.

Setting the stage for widespread police civil asset forfeitures was Passage of HR1658 "The Civil Asset Forfeiture Reform Act of 2000." When HR1658 passed—it killed the “5-year statute of limitations” for Civil Asset Forfeiture that prior gave police “Five Years” to seize property from the date “property” was involved in crime. Police now have five-years to seize property beginning from the date “police claim” they learned a  “property” was involved in crime—that made it subject to civil asset forfeiture.

Incorporated in the 2001 Patriot Act were “retroactive provisions” from "The Civil Asset Forfeiture Reform Act of 2000” that retroactively applied to “assets already subject to government forfeiture”, meaning "property already tainted by crime" (provided) “a specific property” was already part of or (later) connected to a criminal investigation in progress" when HR.1658 passed. Under the Patriot Act, witnesses can be kept secret while being paid part of the assets they cause to be forfeited.

Most property and business owners that defend their assets against Government Civil Forfeiture claim an “innocent owner defense.” Using an innocent owner defense can become a criminal prosecution trap for both guilty and innocent property owners. Any fresh denial to the government when questioned about committing a crime “even when you did not do it” can “involuntarily waive” your right to assert in your defense—the “Criminal Statute of Limitations” for prosecution has past. Any fresh denial of guild, even 30 years after a crime was committed may allow Government prosecutors to use old and new evidence, including information (discovered during a Civil Asset Forfeiture Proceeding) to initiate a criminal prosecution. For that reason many innocent property and business owners are reluctant to defend their property and businesses from Government Civil Asset Forfeiture. Re: waiving Criminal Statute of Limitations: see USC18, Sec.1001, James Brogan V. United States. N0.96-1579.

Just recently Pres. Obama's signed Executive Order EO 12425 that put INTERPOL above the United States Constitution. Obama’s Executive Order authorized INTERPOL to act within the United States without being subject to 4th Amendment Search and Seizure laws. It would appear INTERPOL can tap American phones and emails without a warrant. And that U.S. Police can use INTERPOL to circumvent the Fourth Amendment to arrest Americans and to forfeit their property by bringing INTERPOL into a criminal or civil investigation. Government can too easily take an innocent person’s hastily written email, fax or phone call out of context to allege a crime or violation was committed to cause an arrest or Civil Asset Forfeiture.

Congress could help protect Americans from police/government forfeiture abuse by passing legislation that raised the standard of evidence Government is required to use for Civil Asset Forfeiture from a mere “Preponderance of Evidence” to “Clear and Convincing Evidence.”