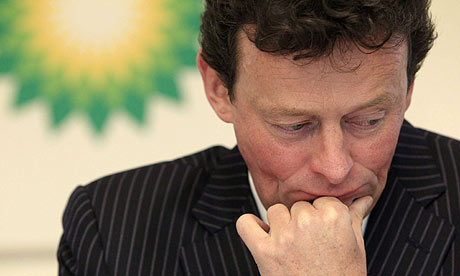 BP made its name synonymous with "Beyond Petroleum" in 2000, rebranding itself as a company that sees a future past dependence on fossil fuels. But ten years later, the oil company is as committed to furthering their oil expansion as ever. And as the Gulf of Mexico oil spill emphasizes only too well, there are serious environmental and human concerns when it comes to drilling for oil.
The Gulf spill, which left 11 workers dead and 17 injured, is about the size of Rhode Island, running across the northern Gulf of Mexico between the mouth of the Mississippi River and Florida. It runs wide, threatening the coastlines, and deep, traveling beneath about 5,000 feet of water and 13,000 feet under the seabed.
The Deepwater Horizon well is leaking 5,000 barrels per day, shutting down fishing across the affected areas, damaging fragile habitats and putting animals in peril. This may be BP's largest disaster, with many claiming it will be larger than Exxon Valdez's spill, but it is certainly n

The FBI Further Proves It's an Irredeemable Dumpster Fire of Corruption

CREEPY! There's NO WAY This Is A Coincidence!

Moderna Rep Admits Everyone Is Part of Huge Experiment

Assange Conviction CORRUPTION: Why This Affects YOU!!!

Pandemics are staged on Television